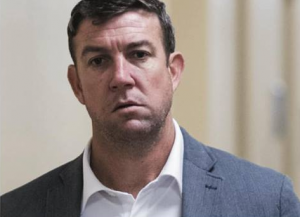 Update:  Minutes after publication of this article, Hunter announced plans to resign January 13.

January 7, 2020 (San Diego) – Rep. Duncan Hunter has not yet resigned, despite saying he would do so after the holiday following his guilty plea to conspiracy to spend campaign funds for personal use.  But he didn’t file to run for reelection. Instead, voters will have 10 candidates to choose from.

The contenders include two Democrats, four Republicans, three no-party-preference candidates, and a Peace and Freedom party member. They’re vying to finish in the top two spots in the March primary in order to advance to a November run-off election.

Here’s a look at how some of the major candidates’ campaigns are taking shape:

Ammar Campa Najjar is the Democratic Party’s endorsed candidate, who came within three percentage points of defeating Hunter in 2018. He’s been actively campaigning since then, amassing substantial funding. He’s a Jamul resident who worked in the Obama White House and for the U.S. Dept. of Labor as well as the Hispanic Chamber of Commerce. Today, he called on Hunter to resign, stating, “It’s dishonorable to ask hardworking taxpayers to pay your salary after pleading guilty, being stripped of voting privileges, and being banned from fulfilling the duties of a congressman.”

He sums up his campaign’s strategy as follows in an e-mail sent to media: “Our campaign is full speed ahead and ready to take our working class, commonsense, country over party message to Congress. I actually live in this district — so as the only leading candidate who can actually vote in this race, I’m confident that we will outperform in the early phases of this election and go on to win the general election. I’ll stack my lived working-class experience against the other coastal elitist, millionaire candidates any day." His issue positions can be viewed at his website.

A second Democrat, Marisa Calderon, made a last-minute change of plans, switching from the 53rd Congressional district to run instead in the 50th district for the vacancy left by Hunter’s upcoming departure.  Executive Director of the National Association of Hispanic Real Estate Professionals, she calls herself “a national advocate for housing and immigration reform,” according to her website.

Republican Darrell Issa, who retired from the 49th Congressional district, today released his first video ad for his campaign in the 50th.   In it, he denounces impeachment efforts against President Donald Trump as a “liberal circus” and claims he is the only candidate who can “fight back against leftists like Nancy Pelosi [House Speaker],“ citing investigations he led into the Obama administration previously.

After the San Diego Union-Tribune ran an article stating that Hunter will likely received his pension despite his felony criminal conviction, Republican candidate Carl DeMaio, a former San Diego City Councilman, issued this press statement: "The fact that Members of Congress have a pension to begin with – let alone still have one after pleading guilty to a felony – is an affront to the trust voters put in their elected officials. Duncan Hunter should have been stripped of his pension along with any other benefits the second he pleaded guilty."

DeMaio has come out with a  10-point Fix Congress First plan, which he says “will force Members of Congress to live under the same laws as the rest of us, including stripping them of the lavish pensions they receive today.”

State Senator Brian Jones, the third prominent Republican in the race and the only top-tier Republican who actually lives in the district, has raked up an impressive list of endorsements including the Deputy Sheriffs Association of San Diego County, San Diego and El Cajon police officers associations, faith-based leaders and more than 40 elected officials including the mayors of La Mesa and Santee, eight local city councilmembers, Assemblyman Randy Voepel and former State Senator Joel Anderson.

On his website, Jones sums up why he believes voters should choose him: “I am the only candidate with roots in the district, a proven conservative track record and the ability to get things done. I grew up here and have represented the people of this district as a Santee City Councilmember, State Assemblyman and now as a State Senator.  In Sacramento, I established a conservative voting record and have received a 100% voting score from respected taxpayer and faith based advocacy groups.  And while I've never run from a fight, nor compromised on core principles, I've demonstrated the ability to do the harder work of finding agreement in order to get things done. I sponsored 26 bills that were passed by the Democratic legislature and signed into law. I would consider it a great honor to be a reliable vote for the President's agenda—standing up for America's interests abroad, reducing regulations, building a strong military, reestablishing respect for law enforcement and restoring the traditional values that made our country great.”

Helen Horvath, PhD, is an independent candidate who has been campaigning hard for months including holding town hall meetings and other functions. A military veteran with a psychology doctorate, she started her own business and has spent decades as a consultant to the federal government. She has made women’s rights a cornerstone of her campaign  which also calls for fiscal responsibility, pulling planks from both Democratic and Republican platforms. Next up, Horvath will be participating in a community forum sponsored by the American Association of University Women and ILKA Technologies on women’s rights on January 16th at 1:30 p.m. in the La Mesa Police Department’s community room.  The event will cover the movement’s history, barriers facing women, control of women through legislative initiatives, and solution-focused legislation.

Other candidates who are latecomers to the race but who qualified for the ballot include: