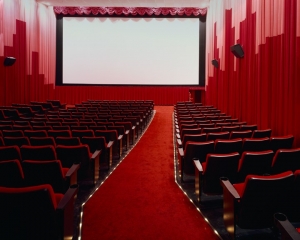 A premier in New York has been cancelled, but Sony has left the decision on whether or not to debut the film on Christmas Day up to theaters.  At least one major chain, Carmike Cinemas, has cancelled its plans for the film showing.  Carmike has 278 theaters nationally including three in San Diego’s North County.

Some shopping malls are reportedly pressuring theater tenants to cancel the movie showing, fearing that the threats could keep shoppers away as well as theater patrons.

Christmas Day is typically one of the busiest days of the year for movie theaters, so cancelling the film debut could mean a financial hit for theaters as well as Sony.  Some argue that it would be wrong to give in to terrorist threats and allow suppression of free speech. But others contend it would be irresponsible to potentially put theater-goers and employees at risk by showing the film.

The hackers warned audiences to stay away from theaters showing The Interview. However the Department of Homeland Security has said it has no credible intelligence of an actual attack being planned despite the threats made by the hackers.

Sony hackers also released personal data on 47,000 employees in a massive data dump that some reports indicate will be more costly for the company than the $100 million hit it would take if it decides to scrap the movie, reports the Wrap, a site covering Hollywood news.  Employees and former employees have filed a lawsuit against Sony over the release of their personal information.