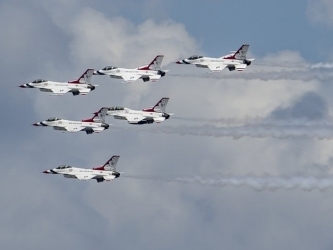 May 15, 2020 (San Diego) – Starting at noon today, six Fighting Falcons from the U.S. Air Force are slated to fly over San Diego and East County neighborhoods in a salute to health care workers, first responders and other essential workers on the front lines during the COVID-19 pandemic.

Residents are asked to watch the flyover from home and avoid gathering while watching the six military planes flying in formation.  According to the map below, the Thunderbirds squadron will start the formation flight over San Diego's South Bay, followed by San Diego, Coronado, then cities in East County, north over the coastal cities, and inland to Escondido.