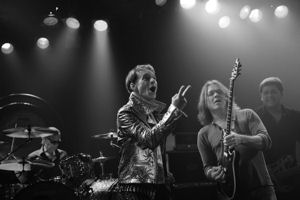 January 25, 2012 (San Diego)--Live Nation is pleased to announce that Van Halen will perform at Viejas Arena at SDSU on Thursday June 14.  Special Guest Kool & The Gang will open the show.  Show time is 7:30; doors open at 6:30.
Van Halen, Rock And Roll Hall of Fame inductees and among the most important and influential rock bands of all time, announced return to the live stage with a 2012 North American tour.
The announcement was made January 5, during a once-in-a-lifetime performance, at the intimate Café Wha? in New York City.  Known around the world for some of the most iconic live performances in music history, the legendary rock band stops at SDSU as part of a nationwide tour.
In addition, Van Halen confirmed their new album, A Different Kind Of Truth, will be released in the U.S. by Interscope Records on February 7. The first single from the album, "Tattoo", and its accompanying video  debuted simultaneously on Tuesday, January 10th, with album pre-orders starting that day.  A Different Kind Of Truth is Van Halen's first original studio album with singer David Lee Roth since the band’s classic multi-platinum album 1984.

Fans can expect Van Halen to perform selections from  A Different Kind Of Truth alongside songs from their arsenal of epic hits that include:  "Eruption," "Running with the Devil," "Jamie's Cryin'," "You Really Got Me,"  "Ain't Talkin' 'Bout Love,” "Everybody Wants Some," "Unchained," "And The Cradle Will Rock,” "Beautiful Girls,” "Mean Street," "Somebody Get Me A Doctor,” "Jump," “Panama," "Hot For Teacher," "I'll Wait," and more from their classic albums Van Halen, Van Halen II, Women and Children First, Fair Warning, Diver Down and 1984.

Van Halen – who the Los Angeles Times recently called “a force of nature” and “one of the flat-out greatest rock bands on the planet” – was inducted into the Rock And Roll Hall of Fame in March of 2007.

With more than 75 million albums sold worldwide, the band's record of achievement is hard to top.   Among a long list of awards, recognition and accolades, Van Halen joins an elite short list of two time Diamond Award honorees in the history of the music industry.  Presented with two Diamond Award RIAA Certified Status' for their albums Van Halen and 1984, the band has produced a repertoire of hits that remain some of the strongest and most influential rock songs ever written that fans will admire for decades to come.
Kool & The Gang found a special sound at the unique intersection of jazz, R&B, funk and pop. Their music has been created by the same core of players for over thirty years: Robert "Kool" Bell, his brother Khalis Bayyan, their longtime friends Dennis "DT" Thomas and George "Funky" Brown.
American Express® Cardmembers will have early access to tickets to Van Halen in San Diego starting Monday, January 23 at 10am.
VIP Packages will also be available through VIP Nation, including premium seats, exclusive merchandise and more. For more information please visit:www.VIPNation.com
TICKETS GO ON SALE SATURDAY JANUARY 28 @ 10:00 AM
at the Viejas Arena Box Office, online at www.livenation.com or call 800 - 745 - 3000
The Viejas Arena box office is open Monday - Thursday from 10am - 6:00pm & Friday from 10:00am - 5:00pm.  On the day of the show, the box office is open from 12:00 Noon – 9:00pm.  The box office accepts cash, Discover Card, MasterCard, Visa – No checks!  Service charges may apply.
The Viejas Arena is located at 5500 Canyon Crest Drive San Diego, CA 92182.
Tickets are $149.50, $79.50 and $59.50 RES plus applicable service charges.

In the middle of a long list of award, recognition and accolades, Van Helen join an elite little list of two time rhombus Award honorees in the past of the music manufacturing.
easter greetings || Mothers Day status