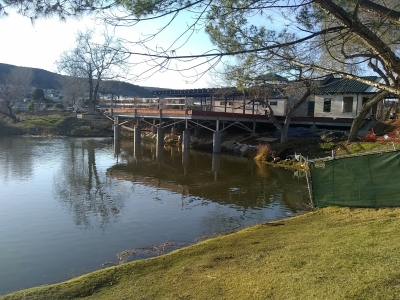 By Mike Allen
March 5, 2021 (Santee) -- About a year ago, Ed Kim was looking forward to St. Patrick’s Day, stocking up on supplies for his Tin Fish Restaurant at the end of the Imperial Beach Pier, anticipating a much busier day than usual.

But then the pandemic hit, forcing the restaurant to shut down, and causing Kim and everyone else to face a year unlike anything we all ever imagined.

“I wouldn’t lie to you if I told you last year was very difficult. It was hard owning a restaurant,” says Kim, 45. “It was two days before St. Patrick’s Day, and we had all this extra fish ordered, all these perishables that we had to dispose of because we couldn’t even get to them because the pier was closed.”
These days, Kim is busy once again, and looking ahead to the day when he’ll open his second Tin Fish at Santee Lakes. Last month, the Padre Dam Water District board approved a contract with Tin Fish to operate a fast-casual eatery at the newly renovated visitor center/ administration building at Lake 4.
While the opening date is still uncertain, Kim thinks the renovation project should be finished by April and give him a chance to open by May.
The newest restaurant will be different than the other outlets (Gaslamp Quarter and Oceanside) in the county. Tin Fish in Santee will offer breakfast, but will also share the same fried fish specialties, including its award-winning fish tacos, fish and chips, shrimp, oysters, and lobster dishes. The new location will also offer coffee drinks, and beer and wine.
“We’re still developing the breakfast menu, but we’ll definitely have things such as egg sandwiches, granola, cereal, chicken and waffles, pancakes….We’ve got an eggs Benedict that we’re using crab cakes and it’s got great reactions,” Kim said. 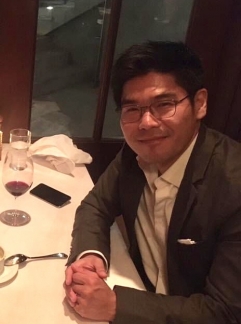 Although the IB Tin Fish was doing fairly well since Kim purchased it in 2016, he says the births of his two daughters about 20 months ago (he also has an 11-year old son), triggered a desire for a little more financial stability. “Once they were born, I said I better shape up, and bring home a little more bread,” he said.
His search for an ideal location took him all over the county until he found the right spot at Santee Lakes.
Laura Koval, Santee Lakes’ director of parks and recreation, said back in 2016 the parks’ staff envisioned a professional kitchen with a large deck over Lake 4 where both visitors and locals could enjoy a meal while kicking back and taking in the beautiful surroundings.
It was all part of the park's Dynamic Vision Plan that includes all sorts of upgrades and additions that will keep visitors coming back. These latest improvements and the ones to come are all financed through the fees paid by visitors, and do not requiring any taxpayer subsidies, Koval said.
“Santee Lakes could not have made this $9 million site upgrade to our facility without our loyal campers and customers who support us every day through user fees,” she said.
The project is also having a positive economic impact. Kim said he expects to hire at least 15 to 20 people at his new eatery.
Being a restaurateur is Kim’s second career. He earned a degree in fine arts at the highly-respected Art Center College of Design in Pasadena and worked first in the video game industry before switching over to online search and marketing. During the latter phase, he earned a reputation for helping restaurants improve their customer outreach.
But his avocation was cooking up great meals for his family and friends. “I was always cooking at home…Italian food, I loved cooking fish,” he told ECM. “I was always thinking that someday I might own my own restaurant.”
Kim says the new, 4,000-square foot deck that can accommodate some 100 patrons should be plenty of space, so folks maintain a safe distance from each other during the hopefully waning days of this pandemic.
But he’s also looking ahead to the time when customers can be more relaxed and celebrate with each other.
“The vibe that we’ve created (at the IB restaurant) is an important factor in our success. We keep it festive,” Kim concluded.”It’s a fun, happy place. We want people to talk, we want them to engage with each other. I can see that same vibe happening at Santee Lakes.”