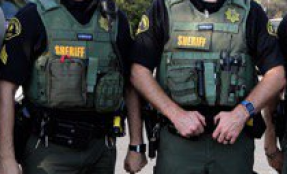 October 9, 2017 (Boulevard) – Brian Ellis, 34, was arrested around 11 p.m. last night for arson and assault with a deadly weapon following an overnight SWAT stand-off in Boulevard.

Deputies responded to a call reporting assault with a deadly weapon in the 38000 block of Tierra Real Road around 5:38 p.m..  According to San Diego Sheriff’s Sergeant William Hout, the suspect “had struck a female relative in the face with a baseball bat and injured a male relative with a sword.”