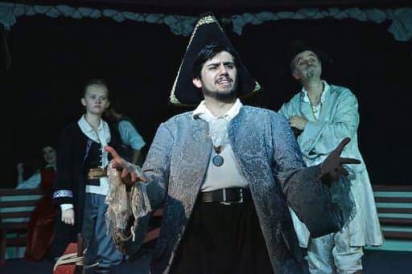 August 14, 2019 (Santee) – We all go through journeys of discovery. Treasure Island, presented by The Pickwick Players, is Ken Ludwig's adaptation of the Robert Louis Stevenson classic that many of us were forced to read in high school English in days gone by. Admittedly, watching a play is far more entertaining.

Treasure Island is the journey of discovery story of young Jim Hawkins as he goes from youth to man. When pirate Billy Bones lays dying in young Jim's tavern, he entrusts a treasure map to Jim.  Jim, the family' doc and the squire agree to embark on a treasure hunt. The tale begins and includes Long John Silver, his parrot and a band of crafty pirates. 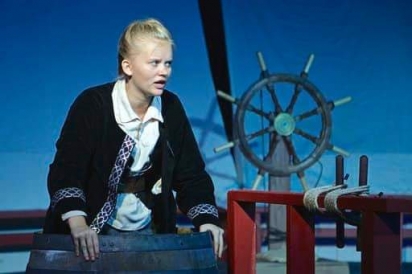 Tyler Richards Hewes directed this pirate-filled story. Roxy Wolff took on the role of Jim Hawkins, a tremendous undertaking that she took quite seriously, navigating

this principal character skillfully. The play is filled with wonderful characters, with many talented actors in the

roles. My favorite, Kaivan Ameen as Squire, was also an audience favorite. He was fabulous, really getting into character. My other favorites were Nicholas Latta as Billy Bones and Tom Morgan as Loyalist, a true talent. I also want to mention James Austin as Israel Hands; I really enjoyed his performance. The entire cast did an amazing job.

The hand-made costumes designed by Abby Hewes were stupendous. The stage includes a creative ship enhancement. The story takes place in 1775, partly on the Jolly Roger and on a Caribbean island. The audience became totally immersed in the pirate world. Great job Pickwick team.for creating such a great place for community and family to come together. 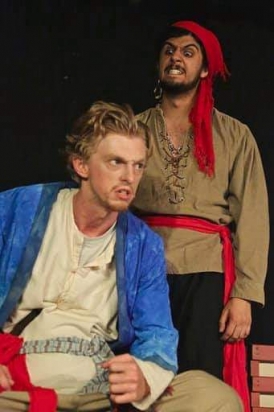 Feed your inner pirate by coming out to support Pickwick - you won't be sorry.