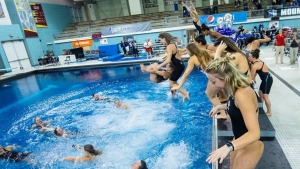 March 6, 2019 (San Diego) - Morganne McKennan, Klara Thormalm and Courtney Vincent of the San Diego State swimming and diving team have all qualified for multiple events for the NCAA Championships from March 20-23. The championships will take place at the Lee & Joe Jamail Texas Swimming Center on the campus of the University of Texas.

Vincent, who makes her second consecutive NCAA appearance, is set to compete in the 200 IM and 100 fly. Vincent was named an all-MW selection in both of those events, in addition to all-conference nods in the 200 fly and as a member of the conference record-setting 200 medley and 400 medley relay teams. Vincent enters the NCAA Championships holding the school record in the 100 fly (52.04) while owning the fourth-fastest 200 IM time in school history (1:59.91).

Thormalm leads the Aztecs with three NCAA Championship qualifying times, as the sophomore is set to compete in the 50 free, 100 breast and 200 breast. Thormalm finished just behind McKennan in the 100 fly, also breaking the previous conference record, placing second with a time of 59.52. Thormalm earned all-MW status in all three events she qualified for and owns the fourth-fastest and seventh-fastest times in school history in the 200 breast and 50 free, respectively.

The trio makes up three of four Mountain West student-athletes who will be represented at the NCAA Championships. Boise State’s Abbey Sorensen will also represent the MW, as she qualified in the 50 free, 100 back and 200 back.