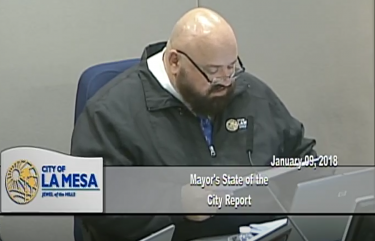 January 15, 2018 (La Mesa) – On Tuesday, La Mesa Mayor Mark Arapostathis delivered an optimistic State of the City, in which he cited low crime, a 2017 survey that said 91% of La Mesa residents rate the quality of life in La Mesa as being excellent or good, and $8.5 million in local infrastructure improvements, plus further investments from SDG&E and San Diego County Water Authority that strengthen the "long-term stability for the infrastructure under our streets."