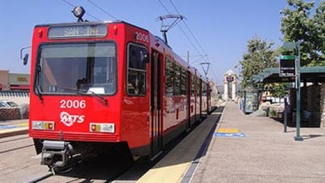 The motorcyclist was injured and transported to the hospital for medical treatment and observation. The extent of the injuries is unknown and no one else was injured in the accident. The motorcycle sustained major damages. The Trolley sustained moderate damage. Traffic investigators from the Santee Station are investigating the collision.

Francisco Roblero, 38, of Whittier, was admitted into the hospital and will be booked into county jail for felony evading peace officers.