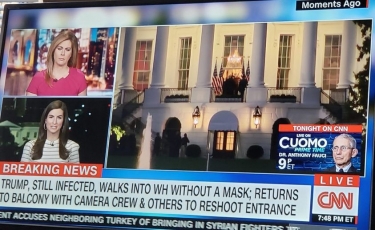 "The behavior of the first family has endangered not only their own health, but that of the staff." -- Megan Ranney, emergency room physician

As he entered the White House, he defiantly removed his mask, thus contaminating the air with the coronavirus, potentially exposing White House staff.  He then posed for a campaign video, exposing a film crew to the virus. In direction contradiction to the advice of public health officials, Trump advised American not to be afraid of the virus, claiming “We’re going back to work.” He urged Americans not to be afraid of COVID-19 – apparently tone deaf to the suffering of families of more than 200,000 Americans who have died and many others left debilitated by the disease.

Then in a tweet this morning falsely likened it to the flu – a post so irresponsible that some social media sites have removed it for endangering lives. Trump previously admitted in a taped interview in February with journalism Bob Woodward that he knew the coronavirus was much more deadly than the flu but downplayed its severity to avoid causing panic.

Now, two White House staffers have tested positive for COVID and were reportedly told to "use discretion" in reporting their illnesses.  "This is what I was worried about," tweeted emergency physician Megan Ranney after the housekeepers' diagnoses were first reported by Forbes. "The behavior of the first family has endangered not only their own health, but that of the staff."