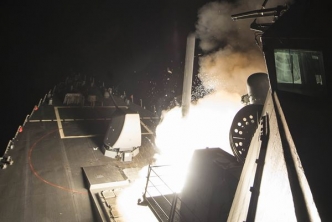 April 6, 2017 (Washington D.C.)— The U.S. today launched over 50 Tomahawk cruise missiles  at the Al-Shayrat Air Base in Syria, on orders of President Donald Trump. The base is believed to be where a chemical  nerve gas weapons attack was launched on April 4th by Bashar al-Assad’s regime that killed scores of civilians, including possibly hundreds, including many children in Idlib.

Key political leaders on both sides of the aisle voiced support for the action,  though even some supporters argue that the Constitution requires a declaration of war by Congress  to take such action. Others voice concerns over a unilateral action that Assad could view as an act of war. Now  prominent Senators and Representatives in both parties are calling for Congress to reconvene and debate whether to declare war on the Syrian government, at a time when the U.S. is already waging war against ISIS.  Assad has also fought ISIS even as his country has been split by six years of civil war.