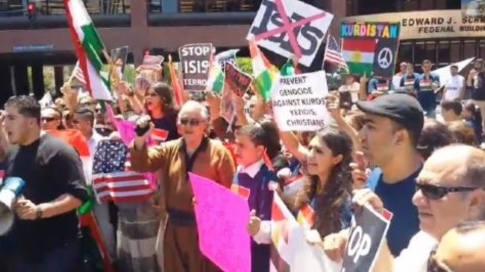 Trump announced his decision after a phone call with Turkey’s president Recep Tayyip Erdogan, in which Erdogan announced his intent to send Turkish troops into  the Syrian region.  Associated Press announced last night that American troop withdrawals along the Turkish border have begun.

Turkey has long viewed Kurds as enemies and critics contend that pulling out U.S. troops puts Kurdish people at risk of genocide and also risks allowing ISIS, or the Islamic State, terrorists to regain control. The Turks are being left to fend for themselves, caught geographically between Turkey and ISIS fighters, as well as the Syrian military.

Senate President Pro Tem Mitch McConnell, the senior Republican leader in Congress and normally one of Trump’s staunchest supporters, blasted the action by Trump as “a stab in the back” to our Kurdish allies.  "I urge the President to exercise American leadership to keep together our multinational coalition to defeat ISIS and prevent significant conflict between our NATO ally Turkey and our local Syrian counterterrorism partners," the Kentucky Senator said. "Major new conflict between Turkey and our partners in Syria would seriously risk damaging Turkey's ties to the United States and causing greater isolation for Turkey on the world stage.”

Senator Lindsey Graham (R-SC), another Trump loyalist, posted on Twitter, “By abandoning the Kurds we have sent the most dangerous signal possible – America is an unreliable ally and it’s just a matter of time before China, Russia, Iran and North Korea act out in dangerous ways.”

Graham pointedly announced, “We wil introduce bipartisan sanctions against Turkey if they invade Syria and will call for their suspension from NATO if they attack Kurdish forces who assisted the U.S. in the destruction of the ISIS Caliphate.” In a follow-up Tweet, he added, “Hope and expect sanctions against Turkey—if necessary, will be veto-proof.  This decision to abandon our Kurdish allies and turn Syria over to Russia, Iran & Turkey will put every radical Islamist on steroids. Shot in the arm to the bad guys. Devastating for the good guys.”

House Speaker Nancy Pelosi (D-CA), the Democrats’ senior leader, called the decision “a deeply disturbing development.” She said ISIS remains a serious threat, adding, “By turning operational responsibility over to the Turks, President Trump has abandoned our Kurdish partners. This decision poses a dire threat to regional security and stability, and sends a dangerous message to Iran and Russia, as well as our allies, that the United States is no longer a trusted partner.”

Both McConnell and ISIS have urged the President to reverse his decision.

Other prominent Republicans have denounced Trump’s action to abruptly pull out troops – an action that has already begun since his announcement, and abandon protection of Kurdish allies.

Senator Mitt Romney (R-Utah) posted on Twitter, “This president’s decision to abandon our Kurdish allies in Northern Syria is ultimately a victory for Assad, Russia, Iran and ISIS. The Administration must immediately reconsider withdrawing the few remaining US Troops who are playing a vital peacekeeping role.”

Senator Ted Cruz (R-Texas) tweeted that while the President is “right to want to bring our soldiers home…we cannot allow ISIS to return.

Right now some 15,000 ISIS fighters remain in Iraq and Syria, and Idlib Province has a higher concentration of terrorists than any location in last 40 years.”

Congresswoman Liz Cheney (R-WY), daughter of former Vice President Dick Cheney, posted on Twitter, “Withdrawing US forces from Northern Syria is a catastrophic mistake that puts our gains against ISIS at risk and threatens US security. This decision ignores lesson of 9/11. Terrorists thousands of miles away can and will use their safe-havens to launch attacks against America.”

Senator Pat Toomey (R-PA) warns that the withdrawal “could also lead to war between Turkey and Syrian Kurrds, a result that will boost enemy regimes in Syria, Iran and Russia. This betrayal of the Kurds will also severely harm our credibility as an ally the world over.”

Congresswoman Vicky Hartzler (R-MO) issued a press statement condemning the action, which she says will “create a power vacuum that will jeopardize the gains we’ve made.  We cannot allow those who have fought by our side to be left alone at a time when bad state actors like Russia and Iran are looking to increase their sphere of influence across the Middle East. I’m concerned about the precedents that would be set by caving to Turkey, who has increasingly taken actions contrary to the best interests of the United States.”

Even Evangelical preacher Pat Robertson announced that Trump risks losing his “mandate from heaven” if he does not reverse his decision to pull troops out of Syria.

Retired Admiral James Stavridis told MSNBC, “Everyone was absolutely flabbergasted” by Trumps troop withdrawal announcement. “Nobody saw it coming and that is a real problem when you’re trying to conduct not only foreign policy…but military operations.”

Up until last week, the Pentagon and State Department Special Representative for Syria Engagement James Jeffrey believed s system of safe zones and joint patrols were in place to prevent the Truks’ long-threatened incursion against the Syrian Democratic Forces, the U.S.-backed paramilitary group that includes Kurdish guerilla groups that formerly fought against the Turkish government.

Trump’s former ISIS envoy Brett McGurk, a senior diplomat who has served in both Republican and Democratic administrations, issued scathing comdemnation. “Donald Trump is not a Commander-in-Chief. He makes impulsive decisions with no knowledge or deliberation. He sends military personnel into harm’s way with no backing. He blusters and then leaves our allies exposed when adversaries call his bluff or he confronts a hard phone call."

McGurk also blasted a statement from Trump’s press secretary claiming that “Turkey will now be responsible for all ISIS fighters in the area captured over the past two years” after other nations refused to take the prisoners from the U.S.  “The United States is not holding any ISIS detainees,” McGurk tweeted. “They are all being held by the SDF which Trump just served up to Turkey.”

Trump issued his own string of Tweets responding to the criticism, stating, “…if Turkey doe anything that I, in my great and unmatched wisdom, consider to be off limits, I will totally destroy and obliterate the Economy of Turkey (I’ve done before!). They must, with Europe and others, watch over the captured ISIS fighters and families. The U.S. has done far more than anyone could have ever expected, including the capture of 100% of the ISIS caliphate. It is time now for others in the region, some of great wealth, to protect their own territory. THE USA IS GREAT!”

Trump’s own Secretary of Defense Mark Esper tweeted a correction of Trump’s statement and excoriating criticism of his own, but later deleted his post.

“While ISIS territory has been greatly curtailed, it’s not true to say that the U.S. captured 100% of its former caliphate (or that anyone has). ISIS still remains a threat. President seems to trust Turkey enough to do this.  Whereas folks like his former U.N. ambassador and those above, do not.”  Esper included an image of a statement that the Dept. of Defense “does not endorse a Turkish operation in Northern Syria.  We will work with our NATO allies and Coalition partners to reiterate to Turkey the possible destabilizing consequences of potential actions to Turkey, the region and beyond…”

is never pretty, but it needs to be done!