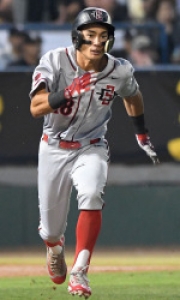 Photo:  Tyler Adkison is an honorable mention Perfect Game/Rawlings All-American as well a a member of the NCAA Division I All-West Region first team.  Courtesy goaztecs.com

June 14, 2017 (San Diego) - Aztec outfielder Tyler Adkison has been named a 2017 Perfect Game/Rawlings Honorable Mention All-American and both he and shortstop Danny Sheehan have been named to the American Baseball Coaches Association (ABCA)/Rawlings NCAA Division I West All-Region First Team. Sheehan was previously announced as a 2017 third team All-American by Collegiate Baseball newspaper.

Adkison (Culver City, Calif. / Mater Dei HS) played primarily in left field for the Aztecs this past season. He batted .337 overall with 14 doubles, a triple, 15 home runs, 64 RBI and 43 runs scored in 56 contests. In addition to leading the team in home runs, RBI and walks, he was first in slugging percentage (.648) and on-base percentage (.445).

His 15 home runs were the most by an Aztec since Chris Gwynn hit a school-record 19 over 89 games during the 1984 campaign. His 64 RBI ranks 13th on the SDSU all-time single season list as well.

Adkison earned first-team All-Mountain West accolades after batting .375 in league play with 10 homers and 42 RBI in 30 contests. He was named the conference Player of the Week twice during the 2017 season and set team records for consecutive times reaching base (hit or walk) at 15 and consecutive hits (10).

Sheehan, who redshirted in 2016, picked up where he left off two years ago by hitting .344 with 17 doubles, a triple, seven home runs 54 RBI and 54 runs scored. His name appeared on the watch list for the Brooks Wallace Award, presented annually to the top collegiate shortstop in the nation. He finished the season with a .976 fielding percentage.

After batting .398 in conference play with 31 RBI and 32 runs scored, Sheehan was named the league’s Tony Gwynn Co-Player of the Year. He ended the season ranked among the top 10 in 11 offensive categories in Mountain West play.