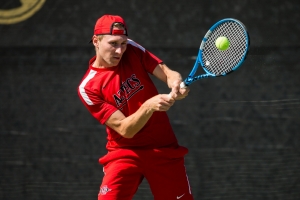 Kirchhoff, Gonzalez Almazan advance to consolation round of 16 on Saturday

However, the Scarlet and Black fell short in its remaining four matches, including senior Raul de la Torre, who was dealt a 6-4, 6-0 defeat at the hands of Cal Poly’s Daly Meinert, while junior Arnaud Restifo was upended by Arizona State’s Tom Wright, 6-1, 6-3. In addition, fellow classmate Nicholas Mitchell experienced a similar fate against UC Irvine’s Sasha Krasnov, falling by a 6-3, 6-2 tally.

Rounding out the Aztec contingent was sophomore Ignacio Martinez, who retired after dropping the opening set to Grand Canyon’s Frederick Grant, 6-4.

Consolation play continues for San Diego State with the round of 16 on Saturday, as Kirchhoff squares off against UC Irvine’s Antoine Barthe, who was a 6-3, 6-3 victor over Scotland Garapedian of Pepperdine, while Gonzalez Almazan will look to turn the tables against the aforementioned Anteater adversary Krasnov. Both matches will start no earlier than 10 a.m. PT.

Updated tournament draws may be accessed at https://bit.ly/2PGx4vG

Singles – Consolation Round of 32