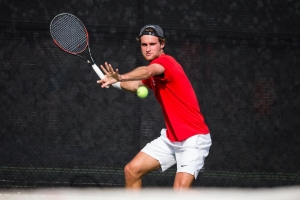 Sander Gjoels-Andersen and Rafael Gonzalez Almazan posted an 8-3 triumph over Villanova’s Dylan Flanagan and Charlie Schuls, while Arnaud Restifo and Fabian Roensdorf joined forces to record an 8-0 shutout of another Wildcat duo in Collin Clumb and Danny Nomura.

With those decisions, Gjoels-Andersen and Gonzalez Almazan will square off against UCLA’s Bryce Pereira and Patrick Zaharaj in the round of 64 on Friday morning at 11 a.m., while Restifo and Roensdorf will lock horns with Derek Austin and Sean Mullins of Boston College at 12:30 p.m.

San Diego State will have four additional duos compete in round of 128 action Friday, including Nicholas Mitchell and Gavin Spencer, who will face UC Davis' Daniel Landa and Alex Scemanenco at 10:15 a.m., while Jan Kirchhoff and Ignacio Martinez battle another Villanova pairing in Tommy Mulflur and Stefan Agustin Suarez at 11:45 a.m.

The brackets also feature the combo of SDSU head coach Gene Carswell and assistant coach Jeff Thomsen, who will square off against Ball State's Tom Carney and Lucas Andersen at 8 a.m., while the tandem of David Hough and Aztec women's tennis assistant coach Nico Vinel received a bye and will await the winner of the match pitting Boston College's Peter Campana and Nicolas de Quesada against unattached Brandon Beardsley and Rodolfo Bukich no earlier than 10:30 a.m.