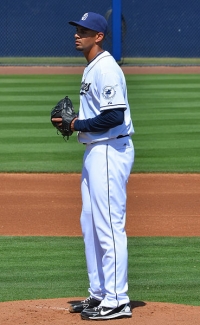 Ross was 10-12 with a 3.26 ERA and 212 strikeouts in 196 innings in 2015.  This is his fourth season with the Padres.
New manager Andy Green also announced Friday that James Shields and Andrew Cashner will be the two and three starters, respectively.  The final two spots are to be determined.
The Padres open their season against the division rival Los Angeles Dodgers on April 4 at Petco Park.