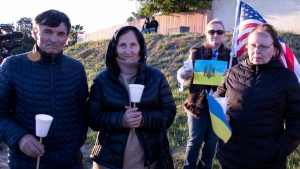 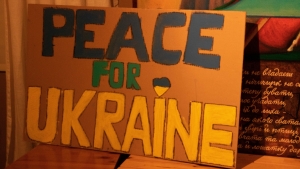 Scroll down to links to videos from vigils

March 1, 2022 (San Diego’s East County) -- Local Ukrainian-Americans gathered in demonstrations these past few days in solidarity with their nation, which is under attack from Russian forces. Thursday night,  a prayer vigil was held in Santee on a vacant lot, where there are plans to build a Ukrainian Catholic Church. Father Yurii Sas of St. John the Baptizer Catholic Church in San Diego led his congregation in prayer and song, asking for God to protect his people in the Ukraine: