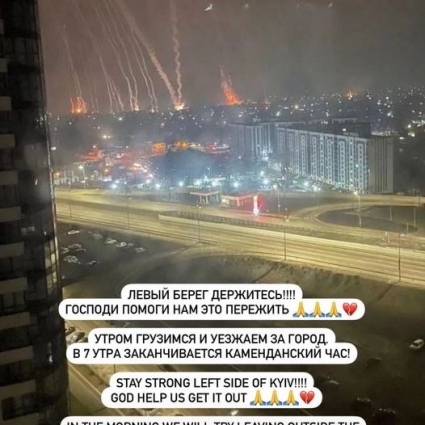 Photo, left: First night of bombing in Kyiv,via Kristine Alessio from a friend in Ukraine

February 27, 2022 (San Diego) – Russian President Vladimir Putin has ordered Russia’s nuclear deterrent missile system to be on high alert, in response to what he calls “dangerous rhetoric” from the West and growing resistance to Russian forces that have invaded the Ukraine, Reuters reports.

Also today, for the first time in history, the 27-nation member European Union today announced it will send weapons to a nation at war, the Ukraine. Europe and Canada have banned all Russian aircraft from their airspaces, including planes belonging to Russian Oligarchs. In addition, the EU also banned airing of broadcasts by RT (Russian Times), Russia’s state media outlet.

The Pentagon has responded to its NATO commitment by sending B-52 bombers to patrol the skies over Eastern European allied territory, Newsweek reports today.