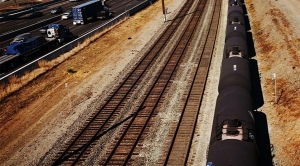 May 22, 2015 (San Diego’s East County) - Are the drought conditions spreading throughout the West Coast connected to climate transformation? States of emergency have been declared in California, Washington and parts of Oregon. Though British Columbia has not experienced this, a recent computer simulation predicted 80% of its glaciers could disappear over the next decade. This entire region responded by joining with eight other states, on three continents, in a pact to tackle Climate Change. Yet the development of fossil fuel continues, so what has the Under 2 MOU changed on the West Coast?