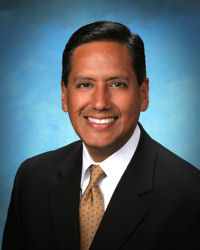 April 28, 2012 (San Francisco) – Union Bank, N.A., today named Executive Vice President George A. Ramirez of El Cajon as the company’s first Chief Diversity Executive, whose mission is to broaden the diversity of the company’s senior management and executive ranks.  Reporting to Union Bank President and Chief Executive Officer Masashi Oka, Ramirez will serve a significant role in leveraging diversity as a strategic advantage in the highly competitive banking industry.
“This is the next step in strengthening Union Bank’s position as an industry leader to more fully reflect the face of society in our executive workforce,” Oka said. “We’ve made strides in this area over the years, but there’s more opportunity to develop, recruit, and retain diverse executive talent. I’m confident that George’s leadership as Chief Diversity Executive will accelerate our efforts to shape a premier executive team and, at the same time, enhance our inclusive culture,” Oka continued.
In addition to working with executive leadership and members of the UnionBanCal Corporation Board of Directors – one of the most diverse corporate boards of any major U.S. company – Ramirez will also collaborate closely with key areas such as Talent Acquisition, Talent Management, Diversity & Inclusion, and Training & Development.
Ramirez, who joined Union Bank in 1986, has more than 30 years of banking experience and has served in various executive, line management and staff roles.  In 2010, he was appointed to lead the effort to integrate Tamalpais Bank and Frontier Bank into Union Bank.  Before successfully leading the integration of these two institutions, Ramirez led Union Bank’s Priority Banking® program.
As Senior Vice President and Market President from 2000 through 2008, Ramirez led a division of more than 120 branches in Orange, Los Angeles, and Ventura counties, and was responsible for all aspects of retail branch operations.  In 1997, he was appointed to manage and develop Union Bank’s Diverse Markets Administration,  established to cultivate new and existing business and to assist in recruiting employees in the African-American, Asian and Latino communities throughout Union Bank’s service areas.
“This is an exciting business imperative and I’m honored to be selected for this responsibility,” Ramirez said. “In addition to building upon existing management and executive development programs, I intend to introduce new ideas to help increase our effectiveness at building robust pipelines of diverse talent. I will work with our Board of Directors, community advisory board members, and other key stakeholders to fully leverage their networks and resources.”
Headquartered in San Francisco, UnionBanCal Corporation is a financial holding company with assets of $89.7 billion at December 31, 2011. Its primary subsidiary, Union Bank, N.A operates 414 branches in the U.S. as well as two international offices. UnionBanCal Corporation is a wholly-owned subsidiary of The Bank of Tokyo-Mitsubishi UFJ, Ltd., is a subsidiary of Mitsubishi UFJ Financial Group, Inc., one of the world’s largest financial organizations. Visit www.unionbank.com  for more information.