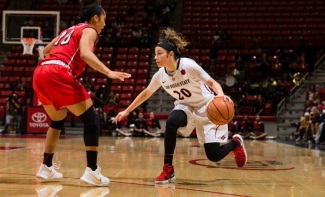 January 27, 2018 (San Diego) - San Diego State seniors Geena Gomez and Khalia Lark scored 17 points apiece on Saturday, but it wasn’t enough as visiting UNLV roared back from an 18-point deficit to hand the Aztec women’s basketball team a disappointing 75-64 defeat in front of 4,568 fans at Steve Fisher Court on Girls and Women in Sports Day.

The two sides slugged it out through 11 lead changes and six ties in the second half, with the Aztecs inching ahead for the final time at 60-59 following a jumper by senior McKynzie Fort at the 5:53 mark of the fourth period. However, the Scarlet and Black ran out of gas at this juncture, as UNLV (11-8, 6-2 MW) seized momentum with a 16-4 closing run to hand SDSU its second straight loss and fourth in its last five outings.

Fort, who entered the contest as the league’s second-leading scorer, was held in check for the second game in a row, posting just 10 points on 4-of-12 shooting. However, the 5-9 guard matched her career-best with a game-high eight assists and two blocks.

Lark (7-10) and Gomez (6-12) were a combined 13-for 22 from the floor (59.1 percent), including an 8-for-13 on three-point field-goal attempts (61.5 percent). Gomez set a career-high with five triples in six attempts to go with six rebounds and six assists, while Lark drained three of her four tries from beyond the arc.

Brooke Johnson scored 17 of her game-high 23 points in the second half, while Katie Powell notched a double-double with 21 points and 16 rebounds, followed by Nikki Wheatley, who finished with 12 points and six rebounds of her own.

UNLV maintained a 45-36 advantage on the boards while outscoring the Aztecs 36-22 in the paint, including a 24-6 spread in the second half.

SDSU was primed for an early knockout punch, unleashing a 14-0 blitz over a four-and-a-half minute span in the first quarter to grab a sizeable 16-3 lead following a Gomez triple at the 3:57 mark. The Lady Rebels crept within 17-10 nearly two minutes later, but a Lark jumper followed by senior Arantxa Gomez Ferrer’s layup restored the Aztecs’ double-digit lead at 21-11 by the end of the period.

The Scarlet and Black stretched the margin to 18 midway through the second quarter as Lark drained another basket, while freshman Te’a Adams sank a free throw to give the hosts a 35-17 cushion.

The SDSU offense went into a funk at this point, missing 12 straight shots through the halftime break while committing four turnovers. With 6:06 left in the third quarter, the Aztecs found themselves on the wrong side of a 40-35 score. Meanwhile, Powell drilled three treys during UNLV’s aforementioned run, while Johnson added a layup and a three-pointer as well.

Gomez answered with two straight triples to give the Scarlet and Black a slim 41-40 edge with 5:13 to go in the period. For the next 9:20, the contest turned into a see-saw affair, as neither side was able to build on a lead larger than four points.

Trailing 60-59, the Lady Rebels scored six straight points on two Wheatley free throws, a Johnson layup and a basket by Jordyn Bell with 3:58 left in the game to take the lead for good at 65-60.

SDSU will return to action on Saturday, Feb. 3 when it travels to Air Force starting at noon.