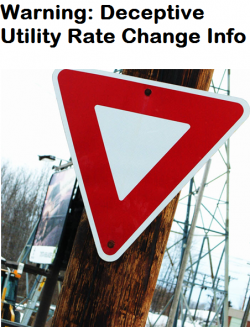 September 11,2014 (El Cajon) – Sierra Club’s San Diego chapter is warning consumers about deceptive claims made by the San Diego East County Chamber of Commerce regarding proposed changes in utility bills, including links to a utility-backed website debunked by media for its efforts to dupe the public into supporting anti-consumer measures.

The California Public Utilities Commission will hold two hearings  on the utility-backed proposed rate changes on September 18 at 2 p.m. and 6:30 p.m. in El Cajon City Council chambers,200 Civic Center Way in El Cajon. The public is invited to attend and testify.

The Chamber sought to persuade members to testify in favor of proposed utility rate changes, suggesting they would save money for most. But those changes  would actually “raise energy costs for low and middle income customers, those who can least afford to pay more on their energy bill,” says Pete Hasapopoulos with the Sierra Club My Generation Campaign. In addition, he warns, “the proposed changes by utilities are unacceptable and threaten our energy efficiency and rooftop solar programs. As a result, they are deeply out of line with state and public priorities on energy and climate.”