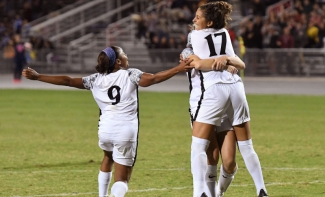 “It was good to get a much-needed three points tonight,” head coach Mike Friesen said. “Performance-wise, I thought it was one of our best first halves in probably three years. I’m really excited about the performance and the game is the game -- 20 shots, no goals, go down a goal on really the only opportunity they got. Then in the second half, we turned around and played decent and got two goals on seven shots. We need to just come out and play like we did in the first half the rest of the way. I’m excited about how we’re building towards the conference tournament and playing our best soccer.”

San Diego State opened the game with the ball and seemingly did not allow Wyoming to get anything offensively in the first 28 minutes. Inside that segment, SDSU attempted 15 shots, all of which came from different angles, different situations and different players. Chloe Frisch, however, took many of those 15 attempts, four to be exact, and nearly scored twice.

Despite the domination, the Aztecs had nothing to show for in the scoring column. The Cowgirls attempted their first shot 28:17 into the game, but the non-threatening shot was gobbled up by SDSU goalkeeper Gabby English, who had three saves on the night. The attempt seemed to spark Wyoming just enough that it started to get into a rhythm and on its second shot, a 37th-minute strike by Brittney Stark, found the back of the net to take a 1-0 lead, which held up going into halftime.

Both teams went into the locker room with San Diego State enjoying statistical advantages in everything but the score. The Aztecs led in shots (20-2), shots on goal (6-2) and corner kicks (9-0), but found themselves regrouping at intermission.

When the second half commenced, the action favored neither team as the ball control was even. In the 57th minute, however, the Aztecs stole the ball near midfield and freshman Chloe Frisch sent a long pass to the other side of the pitch to classmate Mia Root, who could have put the ball into the near side of the net, but instead found a streaking Utush on the other side of the box and the senior finished the play to level the score.

The back-and-forth action continued with the Aztecs controlling the pace a majority of time. As the game moved into the late stages, senior Hailey Balma entered the game and almost immediately made an impact. The Danville native helped San Diego State keep the pressure on and in the 80th minute fed Utush, who was about 24 yards out, straightaway, turned and fired a shot into the left side of the cage to push SDSU ahead, 2-1.

The Aztecs’ defense, anchored by a pair of seniors (Stacie Moran, Dani DeRosa), took it from there, preventing Wyoming from taking a shot in the final 10-plus minutes.

All told, SDSU finished the game by outshooting the Cowgirls, 27-5 (11-4 SOG), and attempted 10 corner kicks, while allowing just one for the entire game.

Utush outshot Wyoming by herself, 7-5, and had just as many shots on goal as the Cowgirls had as a team. Her two goals were Nos. 4 and 5 on the season. For Frisch and Root, who assisted on Utush’s first goal, it marked their second and third helpers, respectively, of 2017. Balma, meanwhile, picked up her third assist of the year.

Prior to the game, San Diego State recognized its senior class in Balma, DeRosa, Xochi Hunter, Angela Mitchell, Moran and Utush. Balma wound up playing 29 minutes, DeRosa, Moran and Utush played the full 90, Mitchell put both of her shots on goal in 63 minutes and Hunter did not play due to injury.

The Aztecs will close their regular-season home schedule on Sunday when they play host to Colorado State at SDSU Sports Deck. First tap is slated for noon PT and admission is free. The game will stream live on the Mountain West Network.