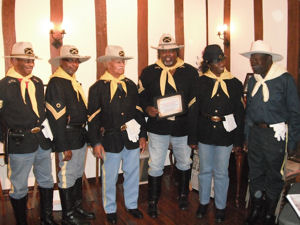 “Throughout history, it was hard for black men, with no education. They couldn’t become officers. They weren’t trained right. African-Americans were always left with the worst equipment (like hats and shoes) while the white officers made 50 cents more.” – Trooper John Green
By Megan McGlamery
February 10, 2012 (Lemon Grove) In celebration of Black History Month, the Lemon Grove Historical Society hosted members of the San Diego Chapter of the National Association of Buffalo Soldiers. Dressed in authentic uniforms, the speakers—including veterans of the famed regiment and their descendants--explained the history of the Buffalo Soldiers, as well as their importance to the San Diego community.
Formed in 1866 at the close of the Civil War, the 9th, 10th, 24th and 25th Calvary Regiments of the Buffalo Soldiers were the first all African-American regiments of the of the United States Army.  Besides fighting various tribes of Indians (who gave them the name of ‘Buffalo Soldiers’ due to their strong, buffalo-like tenacity in battle) these soldiers were responsible for escorting white settlers across the vast territories of the United States.
“There were no modern conveniences and they could only travel five miles per day. They had to take care of the settlers, oxen and wagons,” revealed Trooper Robert Joyce, a former Buffalo Soldier.
Joyce, who grew up on a farm in Texas and graduated from a three-room school, didn’t always know he wanted to be in the army. “My goal was to 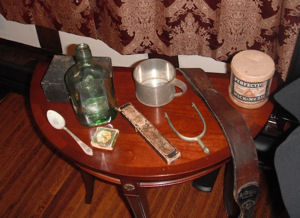 become a civil engineer. It wasn’t for me to become that though, because of adverse circumstances. So, I decided to join the army, even though I didn’t think I would pass my physical. I remember standing in that line, watching people get accepted or rejected. I couldn’t figure out why some were being rejected. They looked healthy to me! I was accepted into the 24th infantry regiment in Japan.”
Shortly after arriving in Japan, Joyce was transferred to Korea where he fought in the Korean War. In 1951, President Truman ordered the disbandment of the Buffalo Soldiers and ordered their immediate integration within other army forces. However, this didn’t happen swiftly. “General MacArthur was in charge when I was in Korea. The president ordered integration quickly, but I didn’t see that,” Joyce concluded.
Trooper John Green, also a former Buffalo Soldier, served in the Korean War as well. “I did my basic training in Hawaii and went straight to Korea,” he stated.
Green also noted the difficulties faced by Buffalo Soldiers due to racism. “Throughout history, it was hard for black men, with no education. They couldn’t become officers. They weren’t trained right. African-Americans were always left with the worst equipment (like hats and shoes) while the white officers made 50 cents more.”
John Roper, another member of the group, discussed racism faced by Henry Flipper, an extremely intelligent graduate of WestPoint Academy who saw his entire career spiral downwards after he went horseback riding with a Caucasian woman. “He was court marshaled for ‘stealing funds’ and even though everyone knew he had been framed, he was dishonorably discharged.”
Roper, whose father served as a Buffalo Soldier, knew nothing of his father’s service until he passed away. “We found a trunk in the attic of all his things.  He just never told us,” he revealed.
Rachel Hilliard, Executive Board Chairwoman of the San Diego Buffalo Soldiers, concluded the meeting with a reenactment of Cathy Williams, the first and only female Buffalo Soldier. Williams served in the 38th infantry for two years before a physical revealed she was really a woman. She was therefore dishonorably discharged and not given her pension.
Throughout WW II, the Buffalo Soldiers played an important role to San Diego County. Between 1942 and 1944, the 10th and 28th Calvary regiments were stationed at Camp Lockett in Campo where they patrolled the Mexican-American border. In 1944, these units (with many others) were sent to North Africa, where they were altered into service troops. However, due to an error, the 28th Calvary unit was not formally converted until 1951. Thus, Camp Lockett serves as the final Army Calvary base within the United States. In 2003, Camp Lockett was declared a Historical District.
The San Diego Chapter of the National Association of Buffalo Soldiers aims to provide historically accurate information about the Buffalo Soldiers as well as increase appreciation for different cultures. For more information about the San Diego Buffalo Soldiers, visit http://sandiegobuffalosoldiers.org/index.html.
For more information about the Lemon Grove Historical Society, visit http://www.sandiegohistory.org/societies/lemongrove/index.htm.