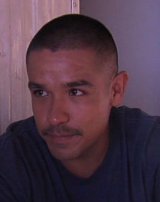 August 25, 2014 (La Mesa) - East County news partner 10 News has tracked down the man shown in a video being beaten aboard a trolley in La Mesa on September 18th by MTS security officers.

In an interview with 10 News, Felipe Vedoy says he was accosted by the officers after he rolled a cigarette outside the trolley. “They told me that I would have to leave…because smoking was not allowed on the trolley.”  He said he was harassed, pepper-sprayed and beaten. “I wasn’t even smoking…I hadn’t done nothing wrong.”

Vedoy has a criminal record and was previously shot, 10 News reports. He says the security guards beat him with a baton on his neck, where a bullet is embedded from an unrelated incident.

A surveillance video shows officers beating Vedoy for nearly seven minutes. The officers have been suspended and La Mesa Police are conducting an investigation to determine whether charges will be filed.  Vedoy was not cited.

Several prior allegations of excessive use of force by MTS security officers have been raised in recent months, as ECM previously reported.  The department has also been accused of racial profiling against Hispanics and faces a federal civil rights lawsuit.

if they officers are guilty then the full force of the law including maximum prison time is the solution.