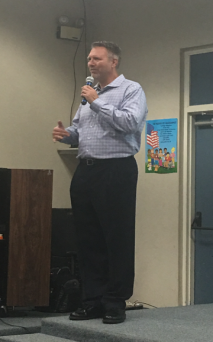 August 21, 2017 (Dehesa) -- On Friday, August 18, 2017, Dehesa School hosted Derek Clark, an inspiring motivational speaker and the author of Never Limit Your Life and the critically acclaimed I Will never Give Up book series.

Dehesa School District wanted to share this incredible experience with other schools. In attendance besides the entire Dehesa staff were teachers and administrators from Julian Elementary, Diego Hills and Diego Valley charter schools.

Derek Clark was born at Grossmont Hospital and spent his early years in El Cajon.  Derek Clark spent 13 years of his life in the Alameda County foster care system and now shares his incredible story of resilience and redemption throughout the world. This is the 1st time that Derek has returned to speak in El Cajon, where his life began. Google ranks him as the number 1 motivational speaker.

At five years of age, Derek’s mother and step-father (his biological father was in prison) turned him over to the California foster care system, where he would spend the next 13 years of his life, contending with rejection, humiliation, emotional distress and overwhelming anxiety. Through it all, he never gave up. He went from victim to victor. He literally took a disadvantaged life and turned it into an advantage. His remarkable story is one of resilience and redemption from his personal to professional life.

Having suffered brutal child abuse and abandonment, Derek was prone to severe distress and lashing out in anger. As a child he was “labeled and misdiagnosed” in almost every psychological evaluation that was performed on him.  As a helpless child, Derek was nearly institutionalized due to severe erratic behavioral problems and violent tendencies. At 6 years old, Derek was diagnosed as mentally handicapped with an IQ of a two and a half year old and suffered erratic psychosis. As he developed, it became clear to his incredible foster parents that this diagnosis was not warranted.

Derek’s life mission has become helping others find the mental strength to recognize and take advantage of opportunities. His keynotes are based on true-life trials and triumphs, and has inspired thousands of listeners to have the mental strength to overcome adversity and fear. His focus is to cultivate drive, focus, and the courage to take actions.

In his presentation he revealed how he overcame his adversities and how he triumphed in his personal life. He led staff down his road of lessons that he learned of hate, anger, resentment, mistrust in adults, violent tendencies, rejection, lack of love, severe child abuse and the memories that have haunted his life. Derek has successfully thrived as a leader in life because of his painful past, compassion for others and living a “No Excuses” life. This paired nicely with Dehesa’s No Excuses philosophy and the belief that every student needs to be prepared for a college education.

Derek’s underlying message is that there is a reason behind everyone student’s behavior. Making a point to develop those individual relationships will resonate with the staff and administration that attended  the event.