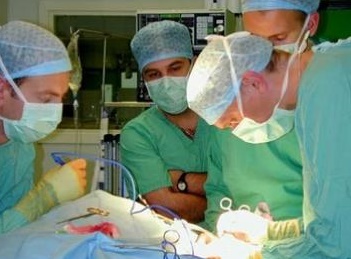 May 7, 2016 (La Mesa) – When drugs began disappearing off anesthesia carts in the Women’s Health Center at Sharp Grossmont Hospital, the hospital installed hidden video cameras to catch the purported thief, an anesthesiologist, the surveillance revealed.  But the videos, shot over a year from mid-July 2012 to July 2013, also included images of women undergoing surgery.

A KPBS iNewsSource investigation reported that some experts raised concerns over medical privacy, suggesting the hospital may have violated the law.  The hospital defends its action and contends that no privacy rights were violated.

A dozen videos reportedly showed Dr. Adam Dorin removing the anesthetic propofol off the carts and putting them in his pocket.  He initially denied taking the drugs but later clarified that he meant he hadn’t taken them out of the hospital. His attorney has asked to review all the 6,966 videos and claims they would show Dorin giving some of the drugs to patients or replacing them on the cart.  He also claims the drug was in short supply and that other anesthesiologists routinely stashed some to be sure they had enough propofol for use in a patient emergency.

But according to the KPBS report, documents filed by Sharp with the California Medical Board by Sharp’s attorney state that some of the videos reveal “female patients in their most vulnerable state, under anesthesia, exposed, and undergoing medical procedures.”

Duane Admire, Dorin’s lawyer, does not want public release of the videos but does want the right to review them in hopes of proving his client innocent.  He contends the videos violated rights of patients and others under the U.S. and California constitutions. Admire states, “…if you ever have a reasonable expectation of privacy, it’s when you’re with our doctor, and exposed.”

John Cihomsky, Vice President of PR and communications for Sharp Healthcare, responded to an inquiry from East County Magazine.  He states that “at no time was patient privacy ever compromised in this matter. Sharp Grossmont Hospital diligently safeguards the protected health information of all its patients, whether it’s electronic medical records, X-rays and other images, or in this instance, video.”

According to Cihomsky, video was automatically recorded only when medical personnel stepped in front of the anesthesia cart. Recording ceased when the individual stepped away from the cart.

He adds, “Access to the video footage was strictly limited to Sharp investigators, and the only footage sent outside of Sharp to the California Medical Board were clips that showed the medication being removed from the anesthesia cart by the doctor. It was discovered that those incidents actually occurred in the operating room when procedures were not taking place and the room was otherwise empty. All other footage that may have captured images of patients in the background has been retained in a secure environment and following conclusion of this case, all video footage will be destroyed.”

Cihomsky provided a link to an article published in the Incidental Economist which suggests media sensationalized the story.  He notes that the hospital “had a potential disaster on its hands” when it feared that medical personnel were stealing and abusing anesthesia drugs, which could threaten patient safety.  He praised Grossmont for “acting decisively to identify a physician who was stealing those drugs and swiftly reported him to the California licensing board.”

The article’s author contends that “women who were filmed couldn’t possibly have expected that hospital employees wouldn’t watch their surgeries” adding that videos were not released outside the hospital so “the threat to privacy is entirely notional.” But the author concedes, “Unless the physician’s lawyer gets his way, of course. He wants to watch each and every one of them.” He further speculates negative media could lead some hospitals to avoid taking videos or sharing information, even if doing so is legal.

But some experts disagree.  Kimberly New, a Tennessee attorney specializing in halting drug theft in healthcare facilities, told KPBS, “There are video voyeurism laws that prohibit such filming without consent.” In addition, Medicare prohibits filming without explicit patient consent.  She added that she believes boilerplate hospital consent forms would not be adequate.

Julianne D’Angelo Fellmeth, an attorney specializing in physician licensing and discipline and administrative director for San Diego’s Center for Public Interest Law, told iNewssource, "The hospital compromised;patient privacy." But, she said, there are colliding interests at stake." “You’re trying to go after the diversion of powerful and highly addictive narcotics from a hospital, which are only supposed to be used in an operating room and not any place else."

Dorin has claimed he was being retaliated against for being a whistleblower to the San Diego Union-Tribune back in 2008 over a medical error that led to a death and litigation.  Dorin sued the state Medical Board in2014 but his case was later dismissed.

Dorin resigned from Sharp Grossmont in October 2013 and has since resumed practice at Palmdale Regional Medical Center while awaiting the outcome of a hearing in October before an administrative law judge that could result in loss of his license to practice medicine. The hospital subsequently filed its complaint with the state Medical Board alleging that he was stealing drugs in 2015.

Correction: An earlier version stated that the hospital filed its complaint prior to Dorin's resignation, when in fact it was after.

That's right. Let the story OUT, SHARP. Did SHARP write the piece for NBC TV SAN DIEGO on MAY 9th? Did they put pressure on NBC and other news outlets and magazines not to run this story? This is bad. What is SHARP hiding? I've seen the Court documents, and Grossmont Hospital's email to staff and doctors and nurses on this past Monday 5/9 is full of lies. They're trying to blame a year of criminal behavior on one guy, who just happened to be one of the few doctors there brave enough to stand up to their bullying and call out their bad acts? Oh, for the record, again: ask anyone who worked with the good Doctor at SHARP Grossmont and they will tell you: SHARP's own medical executive comm. looked at him and others and found no fault, no crime, no bad deeds and no theft of anything. SHARP's email to staff lied. There were multiple doctors, staff, naked patients and medical treatment video on about seven thousand video clips. This is thousands of minutes of video over a year. Video that was watched by a man named Lahore. I also called a California Constitutional expert: routine consent forms, in small font, are illegal if the signee is being asked to waive a Constitutional right. Such consent must be granted through "separate means" such as a separate form with a heading drawing attention to the act--in this case the use of hidden video cameras, listing who was watching and reviewing the footage.
Grossmont Hospital obviously wants to protect itself, but telling more lies will not help it in the end. The reader should know that there were unequivocal illegal and egregious violations of patient privacy (many - hundreds), and there was never a "crisis" to justify violating patient trust and privacy--at least not in the way this article portrays it. The crisis was in inept management and a vindictive hospital administration mindset that sought to find scapegoats. Interesting that this article's author left out so many damning facts about the hospital and its illegal videotaping. One has to wonder why. 1. SHARP's senior management is on record disparaging and defaming since 2008 the very physician they are trying to frame--the very physician who revealed their quality deficiencies and, in essence, forced them to pay millions in malpractice settlements. The same physician who discovered their hidden cameras and covered them up. 2. SHARP's representative quoted in this article tells untruths in stating there was no patient nudity and intimate privacy violations caught on tape and viewed by persons who broke the law in taping, viewing, editing and rewatching the images. Re-read this last sentence carefully because this will be SHARP's downfall more than anything. 3. The article leaves out strong legal opinions and facts that will ultimately lead SHARP to pay out millions more to patients, who will ultimately step forward and sue because they never gave away their rights to be filmed unclothed during private medical procedures. 4. This is a great Hospital--make no mistake about it. But its greatness lies in the quality of its nursing staff and physician staff, and that included Doctor Dorin, who had no restrictions on his medical staff privileges at Grossmont Hospital or any hospital anywhere ever, before or after his very successful decade of practice in La Mesa. This goes for so many other very good physicians and nurses who have left, as Dorin did, on their own accord for less political and less manipulative environments. Staff at Grossmont will start coming out of the woodwork to flesh out the really sad nature of the good clinicians who have been lost to the games and power plays. Let's hope the dialogue shifts back to protecting and respecting patient care again soon.
And if there is some video of human skin and innards then so what. The videos included patient nudity and intimate privacy violations? Big whoop. Its a modern hospital, what do you expect, blood-letting?