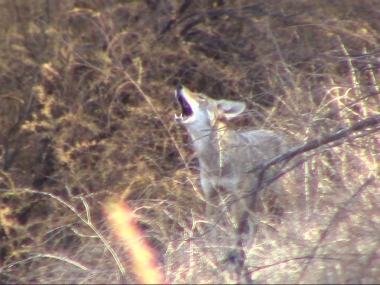 January 17, 2017 (Lakeside) -- Not all coyotes are a nuisance, in fact where there is open land they can thrive without ever setting paw in your yard. If a habitat has all the right elements--grasses, mice, gopher, rabbits and a few other rodent types--the coyote has all it needs to live long and bear young.

I don’t recommend following these wild canine cousins of man’s best friend, the dog, unless you know their behavior well.  I enjoy watching them from a distance with my long lens or video camcorder as they hunt or just bolt off running when they realize I have been following them.

In this video there are two different coyotes filmed a couple of days apart, as they successfully hunted in the valley. The coyote in the second half of the video caught my scent in the cold, still air and rather then go the other way it came to take a look at me; I held perfectly still and was partially hidden to the point it wasn’t sure what I was. He approached me slowly, the last 40 or fewer yards, and just when I thought it had enough of me he turned back and began barking. It barked for a good four minute before it decided to disappear into the heavy brush.

It was bone chilling and exciting to say the least, a first for me. In the 40-plus years of observing the wildlife here in San Diego, I have never seen such behavior.

I think, and I’m only guessing, that it was calling for his pack to come help him/her to run off the perceived threat. I thought for sure I would turn around and see it’s pack; fortunately It was just the one coyote and me standing in the cold winter air. It was an experience I will not soon forget.