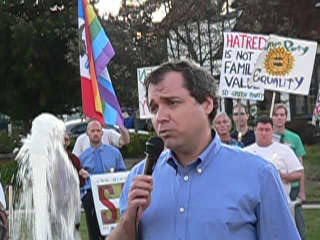 What happened here really could happen anywhere,” said Lemon Grove Councilman George Gastil (photo), noting that this city is among the most diverse communities in San Diego County. “I can tell you that there are some people who wanted to be here today, but they are afraid," said Gastil, a former school board member and long-time Lemon Grove resident along with his wife and children." We need to reach out to people, including people in churches that are more conservative. It’s the uncomfortable conversations that will make a difference.”

Chris Ward, chief of staff for Assemblyman Marty Block, read a statement from the Assemblyman in which he quoted slain gay rights leader Harvey Milk, adding, “The incident that sparked this vigil here is a symbol that there is much more to be done.” Steve Whitburn, who ran for San Diego City Council last election, cited rising violence and hate crimes in recent weeks. He read a statement written by Rhythm

Turner, a musician who grew up in Spring Valley and La Mesa. After hugging her same-sex partner outside Canes Bar in Mission Beach in May, she was allegedly confronted by a man who made slurs against her sexuality, then attacked her. She suffered facial fractures and has stated that she is now suffering from emotional and psychological trauma. Although he was arrested and charged with battery, he could not be charged with a hate crime under current law. “My courage was compromised,” she said in the statement read by Whitburn. “I believe all people should have the right to love openly without hate or fear of persecution.” To those who joined in the vigil, including many people who are not gay, Turner’s letter added, “I thank you from the bottom of my heart.”

“The assault on me was an attack on the whole community,” DeHart said. “I was attacked because I was flying the rainbow flag.” The rally began at the lemon statue in downtown, where demonstrators chanted, “Gay, straight, black, white, marriage is an equal right.”

Afterwards, participants marched to a park nearby where the speakers addressed dozens of activists gathered. A candlelight vigil followed.

A lone counter-protester confronted the gay rights activists at the lemon. “I don’t choose to be black. That’s not the same,” she insisted. Councilman Gastil called the event “a great cause” and concluded, “I think this should be an annual event. Every June we could have a gathering for equality at the lemon.”

I'm dissapointed that this is the 1st time I've heard of anything George Gastil has to do in our behalf. Could it be that he has nothing substantial to offer the community except this? Lemon Grove has big problems. We need our council people to get involved with issues that really effect Lemon Grove, not just sit in their chairs nodding yes or no to issues, and jumping in front of a camera on easy, and of no consequence issues to most of us citizens like this. How lame of you George. Kick it up a notch, a big notch.