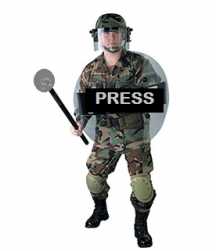 May 25, 2017 (San Diego) – San Diego Congressman Duncan Hunter, asked by capitol reporters what he thought about Montana Congressional Candidate Greg Gianforte bodyslamming a reporter, replied that is’ “not appropriate behavior” then clarified, “unless the reporter deserved it,” the Hill reports.

Gianforte was charged with assault against a reporter from the Guardian last night who asked his views on a Congressional Budget Office report on the GOP healthcare bill.

The violent assault was caught on tape by Guardian reporter Ben Jacobs. The attack was also witnessed by a Fox News crew, who confirmed that Gianforte “grabbed Jacobs by the neck with both hands and slammed him into the ground,” then began punching him. Three newspapers revoked their endorsements of Gianforte over the brutal incident, which broke the reporter’s glasses. On tape, Gianforte can be heard shouting at Jacobs to "get the hell out" after smashing him to the ground.