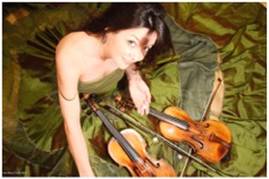 Elisabeth Jacquet de la Guerre is one of the few front-rank female composers of the French Baroque. Lisa Tur Bonet and Kenneth Weiss explore her still underplayed music for violin and keyboard, as well as sonatas by Vivaldi, and solo harpsichord works by Marchand and Scarlatti.

“These performers have found the right approach to [the de la Guerre] sonatas and this has resulted in highly satisfying and captivating performances.” –MusicWeb International

Lina Tur Bonet is currently deeply engaged in two worlds which even today seem separat﻿e: the romantic-contemporary violin and the baroque violin. She has pursued a versatile, dynamic career chiefly distinguished by its variety. She is also interested in interdisciplinary artistic forms and the study of musical symbology.

As soloist, she tours in Europe and South America, appearing at the Styriarte, Lufthansa London, Granada, Brezice, San Sebastián or Herne Festivals, filling halls such as the Vienna Musikverein, the Palau de la Música in Barcelona, the National Auditorium in Madrid, at the Munich Residenzwoche, the Amsterdam Concertgebouw, the ORF in Vienna, the Solís Theatre in Montevideo, the Coliseo in Buenos Aires, the Municipal Theatres in Santiago de Chile and Río de Janeiro and others, recording for the BBC in London, Spanish Radio and Television, TV3, German radio and television, television in Slovenia, Croatia and Bulgaria and the Austrian ORF. She has played all the Biber Rosary Sonatas in Vienna, conducting chamber orchestras in turn performing the Bach, Mendelssohn, Vivaldi or Piazzola concertos, and has just made the world’s first recording of the Tríos op. 34 by Boccherini, with La Ritirata.

Lina Tur Bonet received her first music lessons aged three, from her father Antonio Tur. Much later, she trained as violinist at Freiburg and Vienna Universities under Chumachenco, Pichler and Kurosaki and in master classes with Höbarth, Varga, Gul li, Askenasi, Dumay, Silverstein and Kussmaul.

She holds the Chair of violin at the Zaragoza Senior Conservatory, frequently teaching courses in the rest of Europe.﻿

Tickets for concerts at Cuyamaca College are $18–$25.

Student discounts are available throughout the season, subject to availability. Details are on the SDEMS website. Subject to availability, $10 rush tickets in the last two rows of the venue are sold in the last two weeks before a concert. Rush tickets must be booked by phone or purchased at the door. Groups of 10 or more are eligible for 20 percent off regular ticket prices.