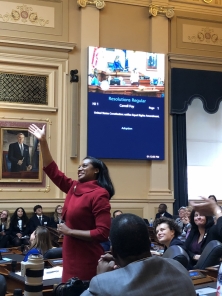 Local women’s rights activist Helen Horvath, who is also a candidate for the 50th Congressional district, hailed today’s news. “Abigail Adams must be dancing in heaven since her husband John ignored her request for women's rights,” she wrote in an email to ECM.

An equal rights amendment for women was called for in 1920 and first introduced in Congress in 1923.  It wasn’t until 1972 that Congress finally passed the ERA, sending it to the states with a seven-year deadline for ratification by 1 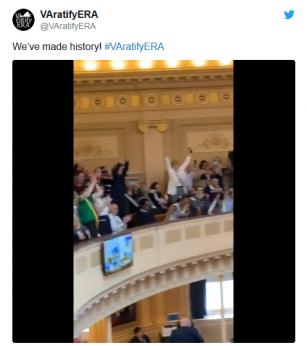 979. Congress extended the deadline to 1982, but still only 35 states had passed the ERA by that deadline, falling three states short.

It lay dormant until three years ago, when Nevada ratified the ERA, followed by Illinois a year later and this week, Virginia after its state legislature flipped from Republican to Democratic control. (Photo, right:  Women cheer passaage of ERA in Virginia statehouse today.)

However, several Republican-controlled states have since rescinded their earlier approvals, so even if a court allowed states' late passages to count, it might also allow recissions to roll back approvals as well.

The Trump Justice department has taken the position that it will oppose  adoption of the ERA since the deadline expired, contending that any ratification effort would need to begin anew, starting with Congress – an unlikely prospect given GOP control of the Senate currently.

But Virginia legislators and women’s rights activists are expected to ask federal courts to weigh in. They have a strong precedent. After all, the 27th Amendment to the Constitution regarding Congressional pay didn’t win passage until 1992—over 200 years after Congress first made a resolution for its adoption, according to Saikrishna Bangalore Prakash, a professor at the University of Virginia School of Law. He told ABC news that a lawsuit will likely be filed against the National Archives to compel it to ratify the amendment.

Meanwhile some Democratic women in Congress are pledging to introduce a new ERA measure.

Those in favor say an ERA is needed to provide permanent guarantees to women for equal pay, access to healthcare, and to protect against discrimination in employment, school and elsewhere based on gender.

Those opposed are predominantly right-wing groups fearful that an ERA might be interpreted by courts to prevent bans on abortion and restrictions on birth control access.

Still, the Virginia vote did include some Republicans in favor. “Equality is a message I think we should leave to our daughters,” said state Sen. Jennifer Kiggins (R). “I’m always ready to support an effort to allow every American to achieve their potential,” the Hill reports.

The ERA itself makes no mention of abortion.  It would add simple, clear language to the Constitution ensuring that “equality of rights under the law shall not be denied or abridged by the United States or by any state on account of sex.” It would also grant Congress the power to enforce the amendment.

Excitement among many women over the rekindling of the Equal Rights Amendment is expected to swell turnout for the 4th annual national women’s marches, including a women’s march in San Diego slated for this Saturday, January 18th. The local march will take place at Waterfront Park with performances at 10 a.m., speakers and 11 a.m. and the march at 12 noon.

The San Diego Women’s March posted on its Facebook page today, “We continue to rise! Thank you, Virginia for doing what is right.”

"“All men are created equal” is in the Declaration of Independence and is not explicitly stated in the Constitution, which starts off "We the People of the United States." . . .But later in Article II when it addresses the President it's only "he, he, he. . ." And voting was left to the states with their recognized discrimination against females (and others). So much for democracy! Regarding those opposed to the ERA, they are predominantly bible-thumpers who are anti-female according to the Christian bible.

I've amended story to clarify that it's the Declaration of Independence which says all men are created equal, though the Constitution enshrined this concept in other words as you note above. Amazing that women are more than half the population yet still treated like second class citizens and now full equality in pay, employment, and everything else is still being held hostage by a few people obsessing over the "rights" of  a fetus based on what some court might or might not rule, over the rights of millions of living breathing women. Don't women's lives count, too?

women have, generally speaking, fallen into the "constitutional rights" trap which includes the fallacy that our rights derive from the Constitution, which is wrong. The Constitution, a document which describes the formulation of the government, in its first amendments mentions some rights which must remain legal but "The enumeration in the Constitution, of certain rights, shall not be construed to deny or disparage others retained by the people."(Article IX). . . . Unfortunately in practice the term "constitutional rights" is used to describe the first eight amendments, including freedom of speech etc., as the only rights we have. Chief Justice Roberts has contributed to this misunderstanding by stating that there is no right to abortion in the Constitution, and while he's correct it doesn't matter. . . . . Where do our rights come from? This is where the Declaration of Independence (DOI) shines. Let's forget the part about "all men" and "among men" (and the fact that only men signed the document), rather assume that we are all included, and focus on the spirit of America in the words: ". . .they are endowed by their Creator with certain unalienable Rights, that among these are Life, Liberty and the pursuit of Happiness." This idea was not carried over from the DOI to the Constitution, with only two persons signing both. . . . So we don't get our rights from the Constitution, no way, we were born with them! And we don't need some document written by politicians to tell us what our rights are. Our personal liberty is a basic right we all have, it couldn't be otherwise, and that includes females, never mind what the bible says. . . . . The United States of America was founded on the idea that we have inalienable rights that do not originate with the government, but that we were born with, including life liberty and the pursuit if happiness, which the government, therefore, cannot take away.