April 10, 2017 (San Diego) – Immigration attorney Steven Riznyk, CEO at San Diego Biz Law, was a guest on our East County Magazine Radio Show aired on March 24th on KNSJ Radio.  (Listen to our interview by clicking the audio link.)   He offered important advice in the wake of President Donald Trump’s travel ban, speaking about little-known provisions that could lead to deportations or refusal to readmit some travelers with green cards or visas who leave the U.S. on vacation or business travel. 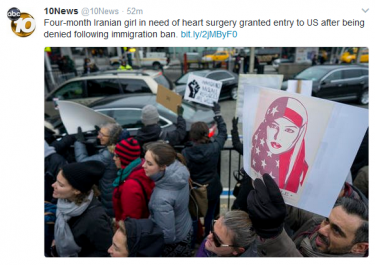 Photo courtesy ECM news partner 10 News :  Among the first to gain entry was an Iranian infant in need of heart surgery.

February 4, 2017 (San Diego) –  Travelers barred from entering the U.S. due to President Donald Trump’s sweeping executive order issued on January 27th must now be admitted due to a ruling by U.S. District Judge James Robard on Friday.

The court issued a nationwide halt to the entire executive order, though the Trump administration has said it will appeal the ruling. The ruling applies to refugees previously approved for admission to the U.S., as well as citizens of seven Muslim nations including Syrians.  It also requires admission of green card holders with visas.