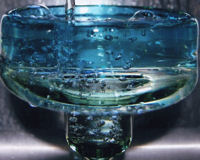 “This proposed agreement, reached after months of negotiations and careful due diligence, is being presented to the Board of Directors for its deliberation and consideration,” Water Authority General Manager Maureen Stapleton said. “If this agreement is approved, the Carlsbad Desalination Project would meet our region’s long-term water supply reliability goal of having 7 percent of our region’s water supply needs met through seawater desalination by 2020.”

The full proposed water purchase agreement and appendices are available at www.sdcwa.org/issue-desal.

The Water Authority will host two evening public meetings to hear public comments on the proposed agreement.  The schedule for those meetings is:

Agendas for those meetings will be posted 72 hours in advance at www.sdcwa.org/meetings-and-documents.

“Water Authority management has led a team of industry experts in project development and finance to negotiate this agreement,” Water Authority Board Chair Michael T. Hogan said.  “It is now time for the Board of Directors to deliberate the proposed business deal and then decide whether to move forward.  I encourage the public to review the agreement and come to one of our upcoming meetings to learn more and provide us with their input.”

The Water Authority has investigated seawater desalination as a new water supply since 1993.  While more expensive than existing supplies, adding desalinated seawater to the region’s water sources would make the water supply more reliable by reducing the region’s dependence on imported water sources that are vulnerable to droughts, disasters and regulatory restrictions.  Since 2010, discussions have focused on contractual terms to transfer risk to the private sector for the design, construction and operation of the desalination plant and the design and construction of the new conveyance pipeline from the plant to the Water Authority’s system.

Under the agreement, the total price for the water – including costs to make improvements to the Water Authority’s pipelines and treatment plant to accommodate the new supply – is estimated at $2,042 to $2,290 per acre-foot in 2012 dollars, depending on how much water is purchased annually.  (An acre-foot is approximately 325,900 gallons, or enough to supply two typical single-family households of four for a year.)  The impact of this new supply on an individual’s water bill will vary depending upon their local water agency.  The average household’s water bill would increase approximately $5 to $7 a month by 2016 to pay for the new supply.

If approved, the project will provide up to 56,000 acre-feet of desalinated seawater annually for the region starting as early as 2016.  In 2020, the project would account for approximately 7 percent of the total projected regional supply and about one-third of all locally generated water in San Diego County.

Under the agreement, the Water Authority will have no responsibility or liability for the design, permitting, financing, construction and operation of the project.  The Water Authority would purchase at least 48,000 acre-feet of desalinated water annually at a predetermined price for 30 years once commercial operations begin.  Water in excess of 48,000 acre-feet annually would be purchased at the Water Authority’s discretion at a lower rate.  The term can be extended up to three additional years due to unexpected or uncontrolled events.

Poseidon also will design and build a new 10-mile pipeline to convey desalinated water to the Water Authority’s regional water delivery system.  The Water Authority will own and operate the new pipeline.  However, to protect the Water Authority against the risk of a stranded asset, Poseidon becomes responsible for a share of the cost of the pipeline, up to 100 percent, if the plant falls short in producing water.

The agreement contains a number of other provisions to ensure reliability and protect ratepayers.  They include: