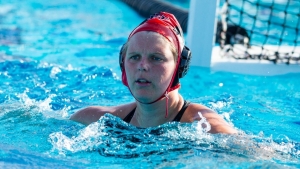 Maura Cantoni turned in an outstanding performance in goal and collected 12 saves and allowed a season-low one goal. Hannah Carrillo scored two of the Aztecs’ four goals. Shelby Kraft had a goal and an assist and Maddie Higginson scored one goal.

The Aztecs scored the first four goals of the game; one in the second quarter and three in the third. Their defense was outstanding all afternoon and they allowed just one goal in 20 shots.

The Aztecs allowed just one goal, their lowest of the year.

The Aztecs improved to 4-1 in GCC play. They have the most wins in the conference.