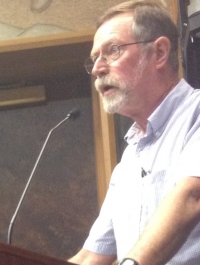 “It is the basic tenet of all Americans to speak truth to power without restriction or regulation.” – David Patterson, U.S. veteran and Ramona resident (photo, left, by Janis Russell)

June 10, 2015 (San Diego)- San Diego’s Board of Supervisors yesterday postponed action until July 21st on a controversial proposal to restrict protesters in the Waterfront Park outside the County Administration Building. The  County claims its goal is to protect free speech rights while also protecting rights of the growing number of others using the new waterfront park for activities such as weddings, picnics, concerts, yoga and children’s play.

Supervisors voted to delay action and ask staff to re-examine the proposal after the American Civil Liberties Union sent a letter calling the action “probably unconstitutional” as written, also noting that the City of San Diego has no permit requirements for free speech activities. Members of the public and Supervisor Dianne Jacob also voiced concerns about the proposed ordinance.