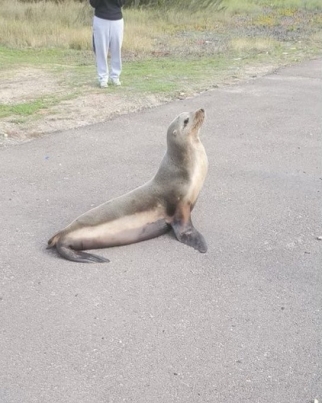 January 8, 2021 (San Diego) – “It’s not everyday you see a sea lion on the freeway,” the California Highway Patrol tweeted after receiving a call shortly before 10 a.m. yesterday reporting a sea lion crossing State Route 94 just west of Interstate 805 in the Fairmount area.

Spring Valley resident Josefine Jandinger was driving east on 94 when she saw two good Samaritans stop their vehicles in the middle of the freeway to direct traffic and protect the wayward pinniped. ‘I see the two amazing humans stopping traffic…trying to save the seal, trying to have the seal walk to the other side of the road,” Jandinger said, ECM news partner 10 News reports.

CHP officers arrived and ran several traffic breaks to assure that the sea lion would not be struck by passing vehicles until Sea World’s rescue team arrived, says Salvador Castro, public information officer for the CHP in San Diego.

How did the sea lion wind up several miles inland?

This isn’t the first time this sea lion roamed into an urban area. In early November, the same sea lion was rescued from Harbor Island Drive. After his release soon after, he showed up at several other unusual locations, though Otjen says of the highway 94 site, “This is the weirdest.”

The San Diego Union-Tribune reports that the same sea lion has been spotted on the Mission Beach boardwalk, the Point Loma Naval base and by a deli at Mission Bay.

Otjen speculates that the straying sea lion may have waddled up the usually dry Chollas Creek bed, a three and a half mile path from San Diego Bay.  “If he found some water, and just kind up kept going up that way, then that is what makes sense,” Otjen said, according to 10 News.

The sea lion reportedly appeared unharmed by his adventure.  SeaWorld plans to conduct tests to make sure the sea lion is healthy, then may release him in the next few weeks.