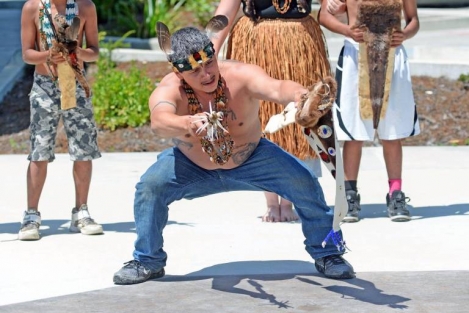 When she was admitted in June to the COVID-19 care ward at her local hospital, her family refused a ventilator. One of her grandsons convinced the nurses to ignore the no visitors rule and let him in. 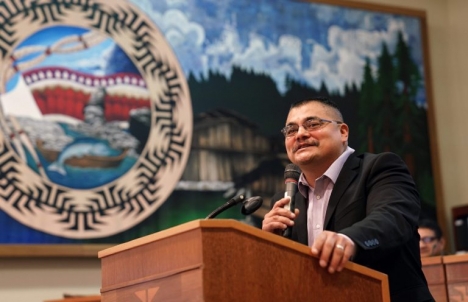 Photo, right:  Yurok Tribal Chairman Joseph James, pictured here at the podium, gives his inauguration speech in 2018. Photo courtesy of Yurok Tribe
In Central California, the Tule River Tribe in Tulare County also found itself cut off from potentially lifesaving data. Of its roughly 1,600 members living on the reservation, 179 have been diagnosed with COVID-19, or roughly 11%. Another 177 of the 357 who live off the reservation have been stricken ill.
Adam Christman, chairperson of the Tule River Indian Health Center and Tule River Tribe Public Health Authority, said California did not grant the reservation health center access to the California Reportable Disease Information Exchange, the state system all testing entities report results to.
“Having access to that system would make it easier for us to identify who should be isolating based on those test results, and monitoring them for quarantine and contact tracing,” Christman said.
After months of agitating for access, the tribe simply gave up asking.
‘Nobody’s going to help us’
Without data or consistent government support, tribal leaders and members have leaned on each other to keep each other safe by social distancing, wearing masks and getting vaccinated.
After an outbreak of six cases, the Yurok tribal council closed its reservation multiple times, suspended housing and utility payments and provided supplies such as food, PPE, firewood and emergency generators to residents. They also launched a contact-tracing team, a food sovereignty program and are working with United Health Services on vaccinating their eligible population. 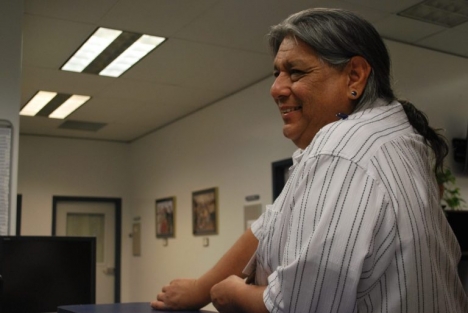 Photo, left:  Ricardo Torres, the secretary of the board for the Sacramento Native American Health Center, has helped to mask or vaccinate thousands of Native Americans in the Sacramento area. Photo courtesy of Ricardo Torres
“Basically the way we looked at it, nobody’s coming, nobody’s going to help us,” said Yurok Tribal Chairman Joseph James. “We’re a sovereign government. There’s things we need to work on to improve our daily lives and provide for our own people.”
In the urban American Indian community of Sacramento, advocates and healthcare professionals at the Sacramento Native American Health Center have inoculated 72% of all American Indians 65 and older in the region eligible for the vaccine right now, far more than the state or national vaccination rate.
Ricardo Torres, a member of the Winnemem Wintu Tribe and SNAHC secretary of the board, helps manage a COVID-19 outreach campaign that has seen thousands of native community members receive masks and vaccines.
Over the last 12 months, Torres saw more than a dozen friends and acquaintances die from COVID-19. He worries more will follow, since only people 75 years and older initially had access to the vaccine in California. Native people born today have a life expectancy of just 73 years, more than five years less than the U.S. all-races population.
“Our population is young,” said Torres. “We don’t have a lot of 75-and-over people. They’re already dead…The people that we need to get vaccinated are the younger people.”
A history of mistreatment at the hands of medical providers has led to distrust in the native community, and the swiftness of the vaccine rollout did not engender comfort.
“People can be vaccine-hesitant,” said Guerrero, of the Sacramento Native American Health Center. “There’s a lack of trust in the federal government…so now we’re really pushing a boulder up a hill.”
Until more Native Americans are vaccinated, tribal leaders said community members will continue to voluntarily social distance, wear masks and pray for good health.
“As the Indian people as a whole, as first peoples of this nation, we’ve dealt with pandemic, sickness, illness, historically since the beginning of time,” said the Yurok Tribe’s James. “Our people went through this before. We survived, and we’ll continue to survive.”