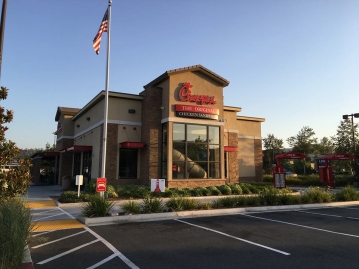 March 22, 2017 (Santee) – To commemorate Tuesday, March 28 as the American Diabetes Association’s “Alert Day,” the nine Chick-fil-A restaurants in San Diego County, including the Chick-fil-A restaurant at 9418 Mission Gorge Road, Santee, will giveaway free food to customers who find out their risk of developing Type 2 diabetes.

Held annually on the fourth Tuesday in March, the ADA’s Alert Day encourages people to find out their risk of developing Type 2 diabetes by taking the ADA’s online diabetes risk test at www.diabetes.org/socalalert. The risk test, consisting of seven questions covering such topics as family history, weight and age, takes less than 60 seconds to complete.

Anyone who visits a local Chick-fil-A restaurant between the hours of 11 a.m. and 8 p.m. on March 28, and shows proof they completed the diabetes risk test, will receive a free eight-piece grilled nugget entrée. Proof can include either a printout from the website page or show the risk test’s final page on a smart phone. No personal information or test results will be collected. No purchase is required. Limit of one free entree per customer per day. Offer consists of entrée only, not a meal.

The ADA said an estimated 29 million Americans have diabetes, including more than one million San Diego County residents with either pre-diabetes or diabetes conditions, and as many as 25 percent of people with diabetes are not aware they have the disease. “Alert Day becomes a wake-up call for many people,” said Dayna Murphy, manager, ADA, Southern California region. “Diagnosis of diabetes often comes seven to 10 years after the onset of the disease. Early diagnosis is critical to successful treatment.”

Chick-fil-A owner-operators in San Diego said their support of ADA’s Alert Day is part of the chain’s commitment to healthy lifestyle habits and disease prevention. In addition, ADA officials said the grilled nuggets entrée with only 2 grams of carbohydrates and reduced sodium meets the nutritional guidelines of the American Diabetes Association. ADA officials also said that that eating out can be a part of a healthy lifestyle when choosing the right menu items.

Just skip the Chick-fil-A Spicy Chicken Sandwich Deluxe, "the worst sandwich at Chick-fil-A. The sodium count alone is clucking ridiculous—it has more than a day’s worth, and as much as 65 Rold Gold Tiny Twist pretzels! But we’re even more grossed out by the list of 84—yes, 84—ingredients, only a few of which are natural foods. The chicken’s seasoning includes MSG, a chemical salt used to make foods more savory (the FDA receives complaints each year that it makes people feel weak or headachey); there’s more of that in the “spicy” seasoning, which also includes artificial colors; and the list goes on to include multiple types of added sugars, fattening oils and Dimethylpolysiloxane, an anti-foam agent. There’s even chemicals in the pickles!" -- see eat this, not that here