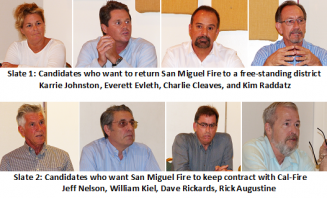 October 20, 2016 (Crest) – The stakes are high in the San Miguel Fire Board race. In July, the board majority voted to axe a contract that outsourced firefighting to Cal Fire, entered into back when property tax revenues had plummeted in the recession and the district had shut down a fire station.  Now four candidates want to undo the recent vote and keep the deal with Cal Fire, while four others are running to restore local control.  The ninth candidate says he hasn’t made up his mind.  There are four seats up for grabs. 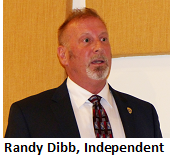 All nine appeared at a candidate forum tonight in Crest, a town that burned in the 2003 fires and where residents pay a higher assessment for fire services than any other fire district locally. July 11, 2015 (San Diego) – Everyone likes to get the most amount done or gained for the least amount of work. In all the interviews and surveys I have done, voters have always claimed apathy due to the feeling and evidence that no matter what they do, their vote will never mean anything.  No return for any effort. However, we fail to realize that these individuals who feel this way  are a silent majority. And as with all majorities are, they are the winning side.  It works, if only they would vote.

July 11, 2015 (San Diego) -- This is the inaugural  “What Works” column. And in this column, there will be stories and editorials that talk about what is working or ideas about how things could work. How things could work when people find ways to come together, even if those ways are tied together by a shoe string. This is about progress to its greatest degree, the very existence of forward motion. It isn’t even momentum that I’m talking about here. It is motion that brings people together for their mutual benefit, that engages them and inspires them and case-by-case builds them up.