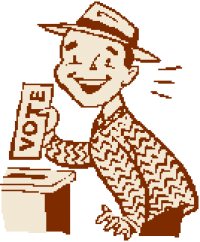 Note from East County Magazine’s editor:  Although the 80th District does not currently include East County, with redistricting it soon will include portions of the inland region.  The winner of this special election is expected to run for reelection in November.

April 4, 2022 (Sacramento) - If you want a vision of California’s political future in 2022, consider San Diego a crystal ball.

Tuesday, the polls close in one of the more contentious of an unusual flurry of special electionsprompted by the “Great Resignation” of state legislators. A south San Diego Assembly seat opened up when progressive Lorena Gonzalez, a one-person factory of state-shaping, headline-grabbing legislation, stepped down in January to take the top job at the California Labor Federation, the state branch of the AFL-CIO.

That left a surprise vacancy that organized labor groups and deep-pocketed business interests — the two political forces that regularly battle for the soul of the California Democratic Party — are eager to fill with the candidate of their choosing.

So far, the two Democratic candidates, Georgette Gómez and David Alvarez, have raised a total of more than $770,000 in direct contributions.

But even more, more than $1.2 million, has been spent by independent expenditure committees — groups typically funded by large corporations and unions that are not subject to the contribution limits that restrict a candidate’s fundraising efforts.

Where’s all the special interest money coming from?

In many cases, it’s the usual suspects of California electioneering. But contribution records filed with the state also include a few surprises, including the first sign of a new, aggressive electoral strategy by the ridesharing giant Uber, plus some surprisingly big donations from a single towing company in Sacramento.

Gómez, a community organizer and former City Council president who unsuccessfully ran for Congress in 2020, is the preferred candidate of labor, including teachers’ unions and the California Nurses Association. Gonzalez endorsed Gómez in early February. The state’s largest business groups have gotten behind Alvarez, a small business owner who narrowly lost his race for San Diego mayor in 2014 and shared the city council dais with Gómez.

At first glance, the stakes in Assembly District 80 are minor.  The winner only secures the job through the end of the year. There are three candidates on Tuesday’s ballot, the other a little-known Republican. If no one receives more than 50% of the vote, a runoff of the top two candidates will be held on June 7.

That day, the same three candidates, plus a second Republican, are running in the new version of the district drawn by the state’s redistricting commission.  The top two in that primary go on to November. The ultimate winner gets a full two-year term starting in January 2023.

But the race has taken on supersized proportions. And that’s only partially because the district was recently represented by the state’s best known union ally.

“We don’t want a seat held by a working peoples’ champion ending up going to someone who is in the pocket of big business,” said Steve Smith, spokesperson for the California Labor Federation. “But I do think if we’re able to retain this seat and win here, I think it sets us up nicely for a number of other districts where we’ll have that same contrast.”

Unions and business interests are used to battling it out in Democratic races. For at least two decades, as the state’s Republican party has descended into near political irrelevance, labor and business have poured money into Democratic-leaning districts where the choice is not between Republican red and Democratic blue, but moderate periwinkle and progressive navy. Often these are the most expensive races in the state.

This year could be bigger than most.

One reason: a staggering number of announced departures from the Legislature as long-serving members are being pushed out by term limits, are stepping aside in the face of unfavorable new district maps, or are seeking offices higher up the political food chain. All that churn will leave a 25-member hole in the state’s Democratic caucus.  For interest groups with a stake in what happens under the state Capitol dome, that presents a rare opportunity to reshape California’s supermajority party and potentially influence state policy for years.

Marty Wilson, who directs the campaign operation of the California Chamber of Commerce, called the Assembly race in San Diego an “attractive opportunity” for business interests who would love to see Gonzalez replaced with a friendlier kind of Democrat. But he also sees the race as a kind of warm-up scrimmage.

“This is a signal of things to come,” he said.

So far, the two Democrats have amassed six-digit totals in direct donations to their campaign coffers. Gómez has raised nearly $470,000, much of which has come from her organized labor allies. Alvarez has raised more than $300,000, with sizable contributions from medical providers, real estate firms, oil companies and titans of the “gig economy.” Lincoln Pickard, a retired contractor who is the GOP candidate in the race, hasn’t reported any contributions.

These committees can spend as much as they like to promote or disparage anyone in the race, so long as they don’t communicate or coordinate with the candidates. In California politics, independent expenditures tend to play an outsized role in negative campaigning, leaving the candidates themselves with clean hands.

The biggest spending committee so far, Nurses and Educators for Georgette Gomez for Assembly 2022, is largely funded by the California Labor Federation and the Service Employees International Union.

On the other side, the biggest Alvarez backer is Keeping Californians Working, a committee that is funded by a wide variety of business interests. In early March, it received a $250,000 contribution from Uber Innovation political action committee.

Uber is no stranger to California politics. In 2020, the company spent nearly $60 million from its corporate treasury to promote Proposition 22, a successful ballot measure to overturn a state law authored by Gonzalez that required gig companies to treat their employees as employees, not independent contractors. The company has also made direct contributions to candidates.

But Uber Innovation is a new political endeavor launched last year by the company with the purpose of spending more on independent expenditures.

The state Chamber of Commerce sponsors two of the other bigger committees boosting Alvarez.  Records show that both have raised little this year, largely drawing on funds received over the last two major elections cycles from the likes of Uber, Lyft, the San Diego-based energy company Sempra and tobacco giant Philip Morris. This year, the two committees only received a single contribution, a $15,000 cash infusion from Amazon.

The fourth biggest spending committee in the race, and certainly the most mysterious one, is called San Diego Families Opposing Georgette Gomez. Major funders to the committee are neither families nor from San Diego. They include JobsPAC, one of the chamber-affiliated committees; Californians for Jobs and a Strong Economy, another business-funded committee and a regular funder of the campaigns of moderate Democrats; a self-described real estate developer in southeast Los Angeles County who has been fined twice by the state’s campaign finance watchdog agency while managing the funds of committees in other southern California races; and the former mayor of West Covina.

But the largest contributor to the committee by far, as first reported by Voice of San Diego, is Ramos Towing, a towing company from the eastern outskirts of Sacramento.  The company, through its owner Henry Ramos, has contributed a cumulative $49,500 to the anti-Gómez effort.

That’s a notable sum. Under state law if a single donor gives more than $50,000 to an independent expenditure committee, it is required to list that person or company as a “top donor” on its campaign material. Ramos did not respond to requests for comment by phone and email.

Gonzalez, the former incumbent, asserted that it’s telling that while the pro-Gómez spending is easy to identify as coming from organized labor, the funding and the political organizing behind San Diego Families Opposing Georgette Gomez are much more opaque.

“If I were oil and landlords and big corporations and insurance companies, I’d probably hide, too, because my district doesn’t buy that,“ she said.

trying to upset our way of life here in California! the tRumpers hate the fact that we love everyone.