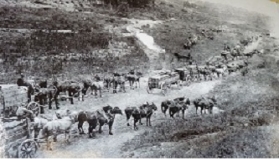 October 31, 2012 (San Diego’s East County) -- With two cities (El Cajon and La Mesa) celebrating their centennials, much attention has been focused on our region’s past of late. But just how much do you know about East County’s colorful history? Take our quiz below to test your knowledge—and learn some fascinating facts.

1 d.  El Cajon outlawed vices and livestock when it became a city 100 years ago; the community celebrates its centennial this year.

2 a.  Beekeeper John Stewart Harbison brought hives here from Pennsylvania. By 1881, he operated 2,000 to 3,000 hives and was the largest producer of honey in the world.

3 d. The Kumeyaay Indian trace their ancestry back to the Neolithic (Stone) Age with a culture that also predates the great civilizations in Mesopotamia and ancient Greece!

4 c. The banditos, led by a brutal murderer,  were foiled after their plot was overhead by a Campo resident in a Tecate cantina. The Gaskill Brothers, sharpshooters who ran the Campo Store, helped foil the scheme in a shootout that lasted 15 minutes and resulted in the deaths of five bandits—including two who were lynched by angry townspeople. Fearing retaliation, the Gaskills fortified their store with stone walls. Today, the old store is a museum that you can visit in Campo.

5 d. The Flying A Studios in downtown La Mesa produced over 150 silent movies in San Diego, most shot on location in East County.

6 d. Helen Stoddard ran as a Temperance Party candidate for Congress in 1912, the first woman candidate in California.

7 d. Hatfield sued the city for refusing to pay the debt for his rainmaking services, but a judge threw the case out of court, ruling the rain to be an act of God. The deluge increased his fame, however, ultimately boosting his unusual career.

8 b. Wells Fargo rewarded the honest citizen who found a strongbox  filled with $10,000 worth of gold, giving him a solid gold pocket watch. Later his family donated the watch to the Wells Fargo museum in Old Town, where it remains on display to this day.

9 b. Albert Robinson, a freed slave, moved to Julian in 1880 with his former master. He met his wife, a cook and together they opened a bakery and later, a hotel which today is the oldest continuously operating hotel in Southern California. His spirit is said to still haunt Room 10, if you wish to come and visit.

10 d. The railway line was nicknamed the “Impossible Railway” due to the numerous catastrophies. When it was finally completed in 1919, sugar magnate John D. Spreckels drove in a solid golden spike.

11 a. Cheyenne warriors gave the 10th cavalry the name “Wild Buffalos” out of respect for their fierce fighting skills.

12 c. East County was the grape-growing capital of California, up until Prohibition, when farmers plowed under their fields. Today, grape-growing and winemaking are making a comeback, with more than 50 wineries in our region. Cheers!

15 c. Ladies with parasols accompanied Governor Waterman on the flume ride, which soon became such a popular pastime that up to four “cars” would be hooked together to accommodate all of the passengers. Particularly daring were the night rides for the young and the young at heart.

16 d.  The U.S. Army Cavalry sent 51 mules to the rescue.  Five mules  were nearly swept away while forging  the Sweetwater River after a bridge washed out, saved after their packs were cut free. As it turned out, nobody was starving in Morena—but the soldiers were rewarded with a hot meal and later, a citation for their heroism from the San Diego City Council.