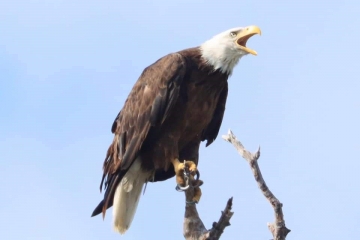 The company was ordered to pay over $8 million in fines and restitution for violations at wind farms in Wyoming and Nex Mexico, but also acknowledged deaths of Bald and Golden Eagles at 50 other wind farms in eight states since 2012.

Despite the slaughter of our nation’s national symbol by wind turbine blades, the company was sentenced to probation, not prison time for any of its officials. The company pledged to shut off turbines when eagles are most apt to be present and to pay $29,623 apiece for any eagles killed in the future.

“For more than a decade, ESI has violated laws, taking eagles without obtaining or even seeking the necessary permit,” said Assistant Attorney General Todd Kim of the Justice Department’s Environment and Natural Resources division.

But other wind energy companies that have built or hope to build wind projects in East County have relied largely on surveys done by the late David Bitner which concluded the projects would not threaten eagles.  Bitner, however, was paid by the wind energy companies; after the studies locally, he was convicted in federal court on charges of mishandling protected birds. He operated without licenses for years, refused to turn over tracking data on protected species to federal wildlife officials, and was found to have four freezers full of dead birds kept illegally.

Donna Tisdale, chair of the Boulevard Planning Group, has been battling wind farms locally for years. She shared this reaction with ECM to news of NextEra’s guilty plea.

“The death toll of eagles, raptors, songbirds and bats form massive wind turbines is a sad commentary on the forced transition to allegedly clean wind and solar,” she says. “Turbine blades can churn at 120-190 mph. That death toll can only increase with the planned decarbonization/climate change goals that will require quadrupling the installation rate of industrial wind and solar projects in California and the nation.”

Tisdale adds that two to four new 100 MW wind / solar projects, “each covering hundreds to thousands of acres, will be required annually to meet these forced goals. Off-shore wind was apparently excluded from the study, along with advanced nuclear, converting gas peaker plants to hydrogen, or biomass.” The RDF and numerous upcoming workshop dates are posted  here.

The American Eagle Foundation and American Bird Conservancy estimate that over 1.4 million birds will be killed by 2030 if there is no change in U.S. policy toward wind energy projects.  Nearly a decade ago, a 2013 study found wind turbines were killing over a half million birds annually in the U.S., and many more facilities have been built since then.

The Altamont Wind Resource Area in northern California alone killed over 2,000 Golden Eagles, and deaths have continued even after mitigation efforts. Recently the National Audobon Society filed suit in Alamaeda seeking to prevent approval of a wind project, noting that Altamont is “back on pace to kill as many Golden Eagles as it did 15 years ago,” according to Glenn Phillips, Executive Director of the Golden State Audobon Society.

The late Dr. Michael Hutchins, former National Coordinator of the American Bird Conservancy’s Bird Smart Wind Energy Campaign, has said, “Alternative energy is not `green’ if it is killing hundreds or thousands or millions of birds annually. “Our wildlife should not be collateral damage in our effort to combat climate change, nor does it have to be.”

Wildlife advocates have called for improved regulations and following science to require proper siting and mitigation. But the wind industry has a long history of ignoring federal laws to protect eagles and making pledges for mitigation that has proven ineffective in many areas, raising concerns that San Diego’s small number of eagles could be devastated as more and more wind projects gain approval.

Wind turbines are decimating raptors in some areas.

Slaughtering millions of birds and bats is NOT "green" energy.  The proliferation of wind farms in the near future will decimate bird populations and cause irreparable damage.  Why is this even allowed to happen at all when better alternatives are available?   Poor innocent birds.   It's so disgusting!