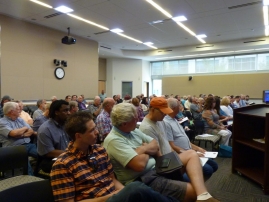 July 12, 2015 (San Diego’s East County) – Several years ago, the County adopted a tiered winery ordinance designed to promote agriculture and help small “boutique” winery owners.  But now the County is proposing drastic changes.  At a packed hearing last week, numerous winery owners and heads of vintners’ associations turned out, most warning of dire harm to the region’s wine industry if the proposal is adopted.

“Should the changes proceed as written, many fear for the death of our budding wineries, eliminating our potential growth, impact and long-term commitment to our communities,” a letter to County program manager Joseph Farace signed by Teri Kerns and Micole Moore states. Moore is president of Ramona Valley Vineyard Association, which has over 100 members. Kerns is Editor in Chief of the Ramona Valley Wine Region Magazine. Together, the couple also owns Ramona Ranch Vineyard and Winery.

Mike Menghini of Menghini Winery got a major use permit back in 1980 for $25,000 long before the tiered winery ordinance was adopted.  Today, he says an MUP would cost around $250,000—prohibitive for new vintners. But he says of his newer competitors, “These guys want a major use permit without a major use permit.” He wants to see the smaller wineries “fight the fight to make it easier to go up the ladder. They’re fighting the wrong battle.” 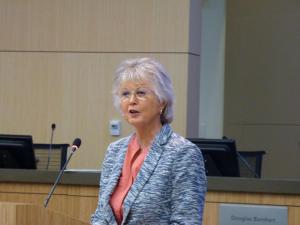 Supervisor Dianne Jacob, who pushed for adoption of the original ordinance, said she “never dreamed of the success.” Back then, Ramona had just one winery with a tasting room. Today, there are more than 30 in Ramona alone—and more in other areas, such as along Highway 94 in Jamul and points further east.  “Our wines in San Diego County are certainly better than the big “T” (Temecula), she said, “but we heard from some of you that we need some changes.”

But that success could be stopped and some wineries forced out of business if the new rules are adopted, many vintners say.  Moreover, several winemakers told East County Magazine that the County’s proposal stems from anonymous complaints made by larger competitors.  Kerns and Moore brought neighbors to attest that they did not complain about noise.  So who did?

ECM has asked the Sheriff and County Code compliance for records of those complaints, but thus far we have not received an answer.

Are the “complaints” over noise and possible code infractions merely sour grapes from one or more winemakers seeking to stomp out competition?

Peter Clark form Altipiano Winery in Ramona says after he published an opinion on what the original ordinance meant in 2013, “anonymous complaints were made against 13 wineries. Ours was among the first investigation. No violations were found except we needed a permit to convert our tasting room. The other 12 complaints are on hold…Twelve wineries face being shut down, so we’re in turmoil. The phrase, `if it ain’t broke, don’t fix it,’” applies here,” he added, drawing applause from the crowd.

But Andy Harris from Chuparosa winery says some wineries aren’t in compliance with Americans with Disabilities Act requirements and are offering up tastings in “everything from basements to sheds.” He asked for even enforcement.

The proposed revisions would ban parties and any event that is advertised or promoted, and also seemsto make no allowances even for private events not promoted ot the public.  “This is very restrictive and not in line with the promotion of agri-tourism,” Kerns and Moore write.  “In my review of several other successful wine regions in California, boutique wineries are allowed a limited number of events per year by-right.”  She wants the ordinance amended to allow up to 24 events a year for up to 100 guests.  That could conceivably allow parties and smaller weddings, providing an important source of revenue for struggling smaller wineries.

Outside amplified music  is prohibited.  County staff says that’s because they don’t want to see concerts at boutique wineries.  But Kerns and Moore, who have been forced to shut down low-key, background music even during weekend tastings, say the Sheriff told them to get an entertainment license. But Kerns says the County informed her that as agricultural land, their property is not eligible for an entertainment license, so they can’t get a permit to play music at all on their outdoor tasting patio – even though neighbors have no complaints.  Kerns and Moore, along with many others, asked that the County allow music as long as it doesn’t exceed the decibel levels of the existing County Noise Ordinance.

The ordinance would not allow wineries to promote a musician, even one donating his or her time. Michael Duryer, a professional musician who performs mostly background music for wine tasting in Ramona and Temecula, says if wineries can’t promote name artists, they lose the opportunity to bring people up to the wineries . “The experience of live music is a positive thing.”

Caterers including the owners of Jeremy’s on the Hill and John Little Catering both suggested the ordinance is unclear and overly restrictive.  Jeremy’s owner asked for a list of which wineries are boutique, small and large. He suggested allowing caterers to apply for annual events that would allow food service at wineries in all three tiers.

Not everyone agreed.  A spokesperson from one winery people should come for wines and offering crackers should be adequate.

But caterer John Little responded, “When people go there, they want to have some food—not go to a winery and just have a cracker. It’s not church. We don’t go to a winery to have communion.” He says restricting caterers from cooking onsite is “not good for business.”

Les Paul spoke on behalf of the East County Vintners’ Association. “We’re on  Highway 94,” he said, adding that if motorists are drinking alcohol, “They need food.”  Serving food with wine would make 94 safer than serving alcohol alone, he added.

The ordinance would also severely limit the amount of tables in outdoor eating areas and the hours of operation.

Kerns and Moore object to the ordinance being so strict it would prohibit even food trucks that commonly serve up fare at wineries and breweries in other jurisdictions.

Some pointed out that the strict language, if adopted by the county on this and other points, would pit wineries in the unincorporated region against wineries in incorporated cities such as La Mesa or San Diego, where such restrictions do not apply.

New limits on building sizes are so stringent that vintners say it would be impossible to produce the amount of wine that the boutique ordinance allows by right.  Aging and storing wine alone requires about a foot per case, so just to store 5,000 cases would require 5,000 square feet—not counting space needed for shipping, offices, a laboratory, maintenance and more.  Ramona Valley Ranch is just 10 acres, so would be limited to only 3,200 square feet total if the new rules are adopted. The owners propose doubling the size limit.

Additionally, the new language would ban use of extra barns or agricultural storage. “Where are we to store all of the equipment that is used once a year in the harvest and production of wine?”  Kerns and Moore ask.

Many winemakers have said they cooperate with other growers to blend grapes for their wines, but until now, the was not expressly allowed. On this point, the County has agreed to allow up to 25% of grapes for local wines to be sourced from other wineries inside San Diego County.

But many testified that this does not go far enough. Linda McWilliams, head of the San Diego County Vintners Association and co-owner of San Pasqual Winery in La Mesa, says “We cannot get enough of everything we need here, especially white wines, but it’s one of the most in demand. We need to be competitive.”

Others testified that there are not enough of some grapes locally to produce bulk wine. In addition, a vintner from outside the county pointed out that when a  regional disaster occurs such as the Napa Valley earthquake, pest damage to crops, wildfire or drought loss, wineries must be able to source grapes elsewhere short term to stay in business. 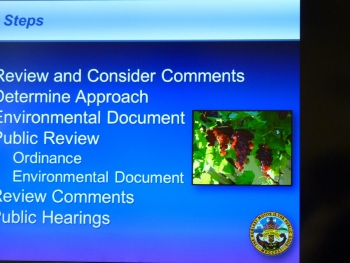 ric Metz from Lenora Winery in Ramona summed up the sentiments of many in the hearing room. “I don’t want to see rights that we have taken away.” He said it’s expensive to start up a winery -- $15,000 to $35,000 an acre just to put in grapes. It can take seven years or more, including aging, for some red wines to be ready for market.  “Being able to operate like any other winery in the state is critical,” Metz told County staff.

Across America, the wine industry has helped to revitalize rural economies – nowhere more so than here in California, in regions such as Napa, Temecula and Pasa Robles that have regulations friendly to the wine business.

These  statistics from the California Wine Institute’s 2013 report show that winemaking is big business in California and the nation:

Kerns and Moore recall that from when they moved to Ramona in 2004 until 2009, “We saw our property values plummet, local businesses go bankrupt and the town of Ramona earn the designation in some circles as blighted.”

But after adoption of the boutique winery ordinance, the town rebounded with much of that due to the impact of 30 new wineries with tasting rooms and many vineyards.  Visitors come to Ramona for the wine, but also stop to shop and dine at local stores and restaurants.  “Main Street is now inviting, with interesting and varied shops and businesses. At the heart of this momentum is our wine tourism industry,” Kerns and Moore conclude in their letter to the county.

But these family winery businesses are rooted in the community, and most are less than 10 acres.  Critics say the proposed changes to the San Diego County Winery ordinance are not friendly for small businesses, consumers, or agri-tourism.

“The future of Ramona’s economic development is very much dependent on the wine industry,” said Ramona Chamber of Commerce executive director Robert Argyelan, who voiced serious concerns over the proposed ordinance changes.

Elaine Lyttleton, co-owner of Hatfield Creek Winery in Ramona, notes that the San Diego County Farm Bureau’s recent event brought 200 tourists into the community—one of many wine-oriented events that could be in jeopardy. She adds that beyond agricultural interests, the wine industry here now supports musicians, caterers and community leaders all “enjoying the economic development prospects trickling down from the infant San Diego wine industry—and who are threatened by some of the new rules popping up in this version.”

Kerns and Moore say that a survey of Ramona winemakers found that the majority said if the proposed ordinance language was in place, they would not open a winery today.

The leaders of Ramona’s wine industry asked County staff to “Look at the challenges facing our start-up industry and let us know if you want us to succeed or stagnate?” They concluded by urging the County to proceed cautiously and “avoid adding restrictions that would make our future as wine-grape growers and wine-makers unsustainable, eliminating the potential tax base created by this growing industry and revitalization of our back country.”

Following last week’s heated hearing, the next steps will be a public review process that will run for 30 or 45 days with a goal to complete revisions by year’s end. Staff encourages comments and suggestions for improving language in the ordinance.

Disclosure: East County Magazine has held events at wineries in the past. Our editor testified to the negative impact that this ordinance would have on nonprofit organizations such as ours, if events and promotion of musicians and winery events are not allowed.  We also feel it would be a disservice to our readers if we were not allowed to inform you about the many activities and events offered at local wineries.

The County Planners. Could their be a more destructive group anywhere? Possibly we have too many County employees looking for a reason for their jobs.