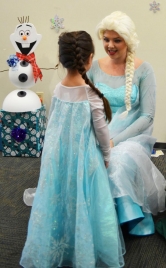 Story and photos by Megan Just

December 8, 2015 (Rancho San Diego) − Though it’s been two years since the release of Disney’s “Frozen,” Elsa and Anna still have the power to draw a crowd.  In this case, the princesses, played by performers from the Parties Unique company, were the headliners of Winterfest at the San Diego County Library, Rancho San Diego Branch, on Saturday afternoon.