Click image above to view the stirring finale of his speech.

To view the other segments of his speech, view our 6-part video series at:  https://www.youtube.com/user/EastCountyMagazine/search?query=Kyles

Kyles, 75, has served as pastor of the Monumental Baptist Church in Memphis for the past half century and has been a leading figure in the civil rights movement nationally. He helped integrate public schools , city buses, public places and workplaces in Memphis. A leader in the Rainbow Coalition/PUSH, he also serves on the National Civil Rights Museum Board of Directors. He has won numerous awrsds including the Tennessee Living Legend Award, City of Memphis Humanitarian Award, Ford Freedom Legacy Award, and the International Civil Rights Walk of Fame.

In San Diego, his speech recalled the dreams of his ancestors, who were slaves, and urged those in the audience to continue King’s legacy by aspiring to fulfill their own dreams. Election of Barack Obama, the first African-American president, demonstrates how far America has come in race relations, he noted. He spoke movingly of King’s courage in coming to Memphis to lead striking garbage workers after surviving a stabbing, and recalled King speaking of death in a prescient way. He also recalled his own family’s battle to fight segregation in the South and offered inspirational words that drew a standing ovation following his fiery oratory.

Dee Sanford, chair of the event, met Kyles on a tour of the Civil Rights Museum in Memphis and invited him to be the keynote speaker for the event, which also featured performances by the Martin Luther King Jr. Community Choir San Diego. (Click here to view a video of the choir's performance) In addition, the San Diego City Council presented a proclamation declared today Rev. Samuel Billy Kyles day in the city. 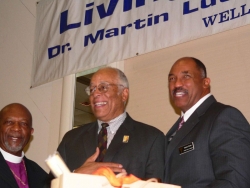 A sell-out crowd of over 1,000 people attended the event, which has grown dramatically in attendance from the first year’s crowd of 40 or 50 people.

Robert Countryman (photo: center right), a long-time YMCA board member and chair of the Y’s scholarship dinner, was presented the 20120 Human Dignity Award in honor of his work helping youths in our region.

Buffalo Soldiers Color Guard presented the flag for the opening of the ceremonies.  The morning ended with a benediction by Rev. Amos Johnson, Jr. of New Creation Church, followed by the audience reciting a "Living the Dream Pledge" and the choir singing "We Shall Overcome."