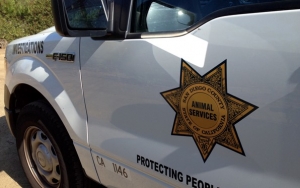 December 5, 2015 (Rolando)--County Animal Services is asking for the public’s help in finding out who threw two small dogs out the window of a car in the Rolando area Wednesday evening, leaving one dead and the other injured.

Another driver witnessed the incident at about 5:45 p.m. at the intersection of 60th Street and University Avenue. He said the car was slowing for a red light when two Chihuahua type dogs were “slammed” or forcefully thrown to the ground out of the passenger side window. Afterward, the car sped off through the red light.

The good Samaritan pulled over and found one of the dogs had died instantly. The second dog appeared to have a broken leg, hurt muzzle and possible broken ribs. The witness said the car was white, but because he was focused on the dogs, he was not able to provide any other details, such as a license plate number or description of the suspects.

He put both animals in his vehicle and returned home. When he opened the door to get the injured animal, the dog jumped out and ran down into a large canyon. Animal control officers searched the area for the dog but haven’t been able to find him.

The missing dog is a tan color, weighs between 15 to 20 pounds and is either a mixed breed Chihuahua or possibly a Chihuahua/Corgi mix. He was last seen in the area of Home Avenue and Fairmount.

“For someone to violently throw these two small dogs from their vehicle is both horrific and disturbing,” said Animal Services Director Dawn Danielson. “Whoever did this must be found and held accountable for their actions.”

A suspect in this case could be charged with felony animal cruelty and face up to several years in prison as well as fines.

The Department continues to search for the injured dog. If anyone sees an animal matching the description in the area of Home Avenue and Fairmount, call the Department’s 24-hour emergency dispatch at (619) 236-2341.