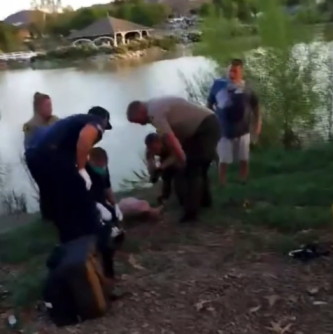 Photo, left: Screenshot of Angel New's video shows paramedics and deputies working to revive the victim, as Scot Wolfe (right), the heroic citizen who first went into the water to save the woman, looks on.

August 3, 2022 (Lakeside) – A woman was saved from drowning at Lindo Lake yesterday after Scot Wolfe, a bystander, entered the water to save her.  Sheriff’s deputies followed and pulled the woman out of the water and began lifesaving measures until paramedics arrived.

But some Lakeside residents are criticizing deputies and a park ranger for not taking action until a citizen went in first.  A video by Angel New on Facebook shows that at least a minute and forty seconds elapsed before the first deputy went into the water. Several deputies, appearing in no rush, can be seen standing beside the lake, one stating that they must take their equipment off before they can enter the water.