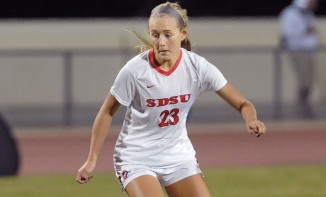 October 15, 2017 (Colorado Springs) - San Diego State scored in the sixth minute and never looked back in a 4-0 road victory over Air Force, which enter the game in second place in the Mountain West standings. With the decision, the Aztecs improved to 7-7-2 overall and 4-2-2 in the MW, while the Falcons dropped to 7-5-3 and 4-1-3 against conference competition.

SDSU made a statement early in the contest when Chloe Frisch scored her second goal of the season from 15 yards outs with 5:16 on the clock to give the visitors a 1-0 lead. The assist went to Esther Arnarsdottir, who recorded her second assist of 2017.

The Aztecs doubled their advantage in the 22nd minute when Mia Root connected with Aliyah Utush, who provided San Diego State a goal off a deflection. The scoring effort was Utush’s third of the season and the assist was Root’s second of the year.

San Diego State carried a 2-0 lead into halftime and increased its lead to three just 2:24 into the second half when Hailey Balma took a one-timer off a feed from Utush. The goal was Balma’s first of the year and the assist was Utush’s team-best fifth of 2017.

SDSU rounded out its scoring in the 71st minute when Balma locked in on Phoebe Leitch and fed it to the freshman, who one-timed it from five yards out to provide the final margin. The goal was Leitch’s first of the season and the assist was Balma’s second.

San Diego State finished with a 13-6 advantage in shots, a 7-1 lead in shots on goal and a 3-2 cushion in corner kicks. Balma and Utush led the Aztecs with four and three shots, respectively, and goalkeeper Gabby English made one save.

SDSU returns to action on Friday, Oct. 20, when it plays host to Wyoming atop SDSU Sports Deck at 7 p.m. PT. The game will stream live on the Mountain West Network. Admission is free.